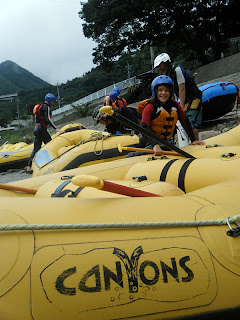 If you find yourself in Tokyo in late summer with high-energy adventurous kids to entertain and want to hightail it out of the city, you can't do much better than a weekend in Minakami. There are several outfits up there offering all sorts of activities, but we booked everything with Canyons, and you don't really need anybody else. We even stayed at Canyons' own Alpine lodge, which offers basic Japanese-style tatami rooms (shared baths down the hall), a communal kitchen and barbecue sites for self-catering, a cafe and bar. There's also a nearby swimming hole with rope-swing and a  small campground next to the parking lot, if you'd rather pitch a tent and save a few bucks (not ideal but ok, friends say, if you can stand the sound of trains roaring past in the middle of the night). A half dozen other families we know were there the same weekend, not all doing the same activities at the same time, but all meeting up at the end of the day for drinks etc., and we had one big group barbecue, with each family bringing something to throw on the grill and a large salad or side to share.

The guys who run the Canyons operation really know what they are doing -- they know the area, they know the terrain - some of the most popular courses they created themselves. And they take every safety precaution. You bring a swimsuit, they provide the rest: wetsuits, life jackets, helmets, etc. Many Canyons guides are ski instructors during the winter.

From July to September, conditions on the Tone River are calm enough - Grade 1-2 rapids - for children to go whitewater rafting. That is, the rapids are grade 1-2. In Spring, they're grade 3-4, and you have to be at least 13 to participate. 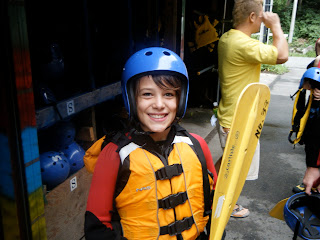 suiting up at the base lodge 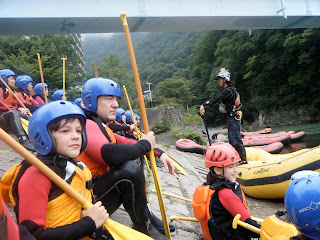 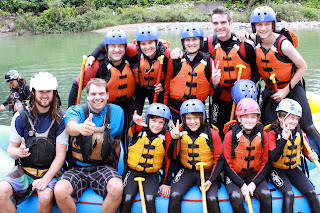 right before setting off down the river, with the Dix family

It was the last weekend in August, and the current was just swift enough (in parts) to keep things interesting. We had a few good thrills paddling through some rough patches, our guide steering from the rear and telling us when to pull our oars out of the water and just hold on... 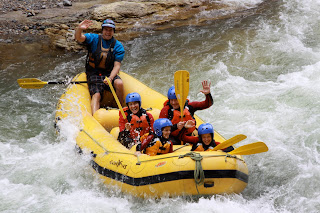 Canyons' own photog took some great shots for us 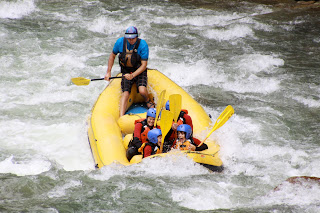 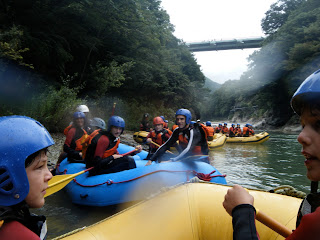 my own pics, snapped from my seat in the second row of our raft 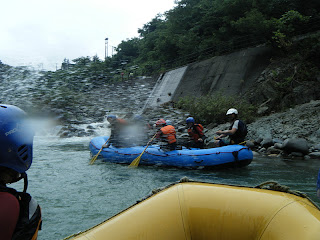 At several points along the way, we were able to climb out of our rafts and float downriver feet first, or climb onto the banks and up onto some rocks to jump back in. 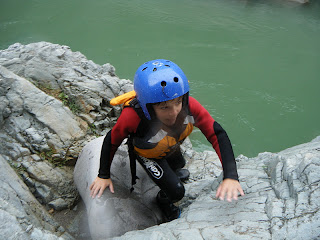 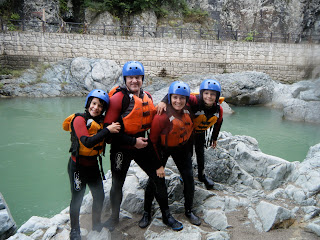 Not everybody had the nerve to leap off from this one very high cliff; somehow I managed it but only because I was afraid I would fall if I tried to climb back down in my neoprene socks! Here's Terry and the boys in midair: 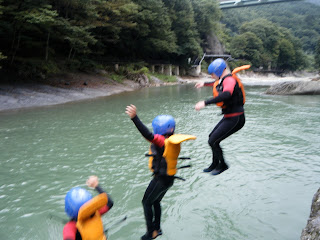 At the end of the course the guides flipped a raft over and let the kids bounce off it and into the water below.. 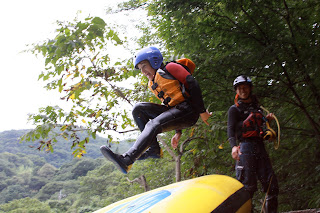 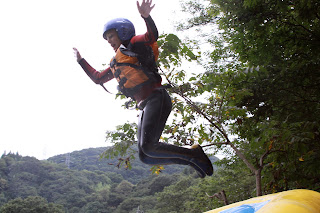 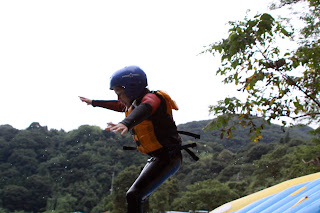 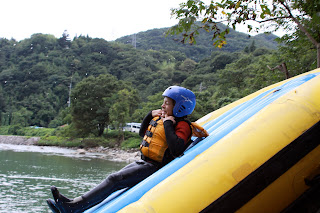 On the Sunday we did the family-style canyoning, which was brilliant. It entails taking a ride up into the mountains and then hiking along forest trails until you reach a good point of entry, where rocks become water slides. 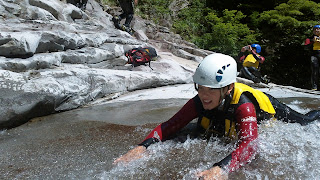 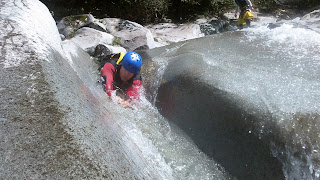 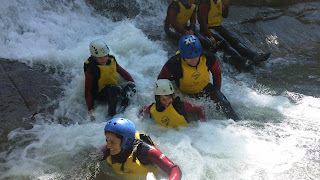 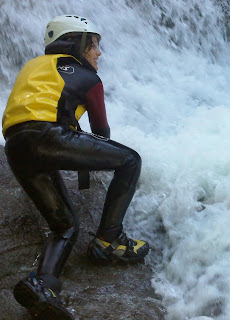 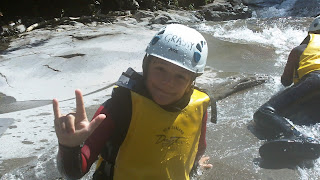 Our boys love water parks, so they were over the moon doing this. Canyons offers canyoning for grownups too, and Terry says it's similar, just more intense - more climbing, deeper, rougher waters, etc. Something the expat guys do when the wife and kids are away for the summer. 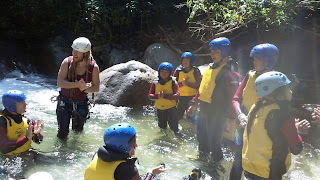 We were lucky to have Mike as our guide. (He's the one not wearing a yellow life jacket in the photo above). Originally from New Zealand, he's lived and worked in Japan for years - he's one of the guys who started the whole Canyons operation - and is fluent in Japanese. I kept wondering how he keeps his long ropey dreadlocks from catching on the rocks. He made a sculpture for us: 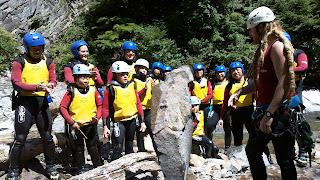 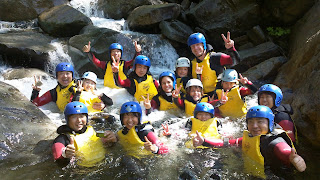 Logistics: Many of the families who spent this weekend in Minakami with us drove up from Tokyo, a 140 km or 2-hr journey up the Kanetsu Expressway. And they were glad to have their cars, to get out and explore the area a little. A few moms took their daughters to a co-ed outdoor onsen - pretty setting, lots of naked old men. A few of the families went kayaking, which they had to arrange separately, as Canyons doesn't offer it.

It's just as easy to take the train - we took a JR to Omiya and then a Shinkansen to Jomo-kogen station, which took less than 2 hrs, plus another half hour van ride to the lodge. One of the Canyons guides collected us at the station at no extra charge. Everything was arranged via email: canyons@english.jp

In addition to the rafting and the canyoning, we managed to fit in a half day of mountain biking with MTB Japan, also booked through Canyons. MTB provided the bikes, helmets and gloves; the instructors picked us up at the lodge and brought us back. We learned how to cycle down steps, up steep rocky slopes, down and around steep curvy trails covered in leaves that make you skid out. And I learned something else that day: that I'm a big chicken.

P.S. As a bonus, there was a matsuri that weekend - most communities in Japan throw some sort of summer celebration, or harvest festival, with food, beer and sake stalls and revelers processing in yukata robes, headbands and and tabi sock-booties, beating on taiko drums, singing and/or dancing around. Mike, Mr. Canyons himself, drove a bunch of us lodgers out to the Minakami festivities in time to catch the fireworks: 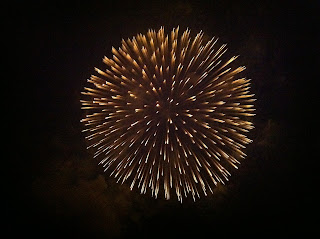 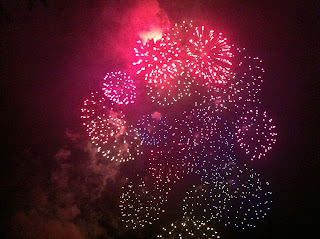 Posted by Maryanne at 4:57 PM No comments:

Labels: Minakami, out and about with kids
Newer Posts Older Posts Home
Subscribe to: Posts (Atom)