the wrath of Typhoon Roke 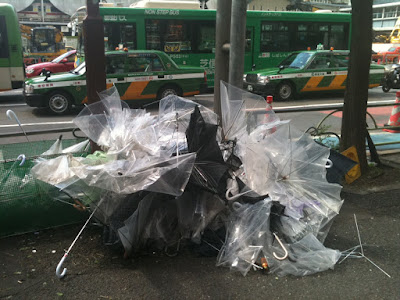 outside Shibuya station on Wednesday afternoon, September 21, 2011 (photo by Katy Dix)
Posted by Maryanne at 4:19 PM No comments:

From Time Out Tokyo

For decades, it's been a magnet for shoppers, after-work revellers and disaffected youth. But Center-Gai's final weekend of infamy is now behind it. The pedestrianised shopping street, which connects to Shibuya's famed scramble crossing, unveils its new name today – and it sounds more like a children's TV show from the 1970s.

Read more »
Posted by Maryanne at 5:04 PM No comments:

I needed a shot of those stripey socks

Every so often there's a flea market in a large parking lot down the road from the Meiji Jingu baseball stadium in Kasumigaokamachi, in Shinjuku-ku. You can reserve a spot on the pavement for a couple thousand yen, so a friend of mine booked three spots, and a few of us spent the day selling old clothes, toys, books, random household items and electronics all donated by ourselves and some other friends. We were lucky to be across the aisle from a coffee truck and a few food vendors, and managed to unload heaps of stuff, while practicing the art of bargaining, which I am not good at and which is not usually done here in Japan (it's probably considered poor manners to argue over price). I tend to give in too quickly -- whatever it takes to get rid of that Toy Story puzzle or that large plush mallard duck, I say. But this over eagerness did not always serve me well - when one couple asked how much for the ginormous stuffed lion I practically screeched "200 yen!" and thrust it forward, prompting them to back away, slowly. (My friends at the other stall sold it later for 500 yen - they clearly have the gift.)

So why do we do this? All our proceeds (I think we earned in the neighborhood of 50,000 yen, all told, which ain't too shabby) will go to charity, though we haven't decided on a recipient yet. Last time we did it we gave money to a friend of a friend who was making regular runs up to Tohoku, buying and distributing fresh fruit and veg to those barely scraping by among the wreckage of the March 11 tsunami. Maybe this time it will go to an established NGO like Peace Boat. In any case it was a lot more fun than I thought it would be, and by the end of it we were giving lots of things away for free. These lucky customers (below) looked thrilled to score this plastic Pokemon toy, so in return I asked them to pose for a photo. I think we all know who got the better end of that deal. 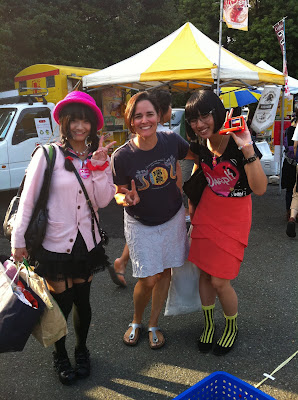 Posted by Maryanne at 6:06 PM No comments: 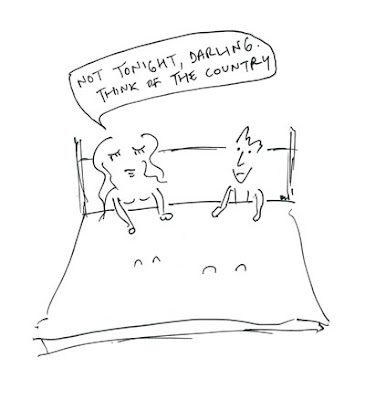 illustration by David Labi for Metropolis

I lifted the following article (and the cartoon above) from Metropolis magazine, Issue No. 912. You can read it online at metropolis.co.jp by clicking here .

During my seven years in Japan, one of the most interesting and unusual aspects of Japanese culture I experienced was that of jishuku.

Simply put, jishuku refers to the act of voluntary restraint or the use of moderation in one’s actions or activities. This typically occurs after a terrible event or occurrence, in particular when there has been loss of life or human suffering. In April 2005, in Hyogo Prefecture near Osaka, a seven-car commuter train derailed, killing 106 passengers and injuring over 550 others. In August, four months later, the annual fireworks festival held by the local city—usually drawing tens of thousands of spectators—was canceled out of this sense of self-control.

The March 11, 2011 earthquake and tsunami brought immeasurable devastation to the north east coast of Japan. In April, the usually festive and much revered season of hanami saw significantly fewer people out and about drinking and enjoying themselves during parties. Extravagant weddings were scaled back, travel plans canceled, and frivolous shopping trips abandoned.

But the most fascinating aspect of jishuku is that nobody is forced into it.

Read more »
Posted by Maryanne at 2:02 PM No comments:

don't lean on me 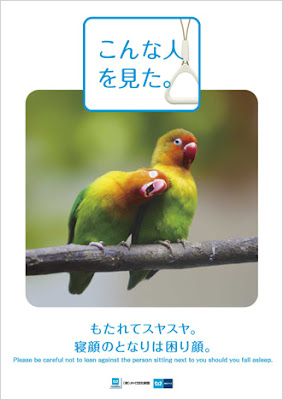 Here's the latest from the current cute and cuddly Metro campaign. The series is no match for the cartoons of past years, IMHO, but I'll concede that these birds -- bearing the somewhat longwinded message, 'Please be careful not to lean against the person sitting next to you should you fall asleep' -- are pretty good. It's funny, because it really happens. Real life example: 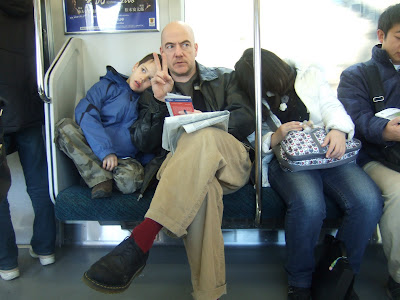 from the archives: Terry and Conor on the JR Yamanote line, January 27, 2008

Several years' worth of instruction on mass transit etiquette, including signs featuring Clifford the Big Red Dog (see 2006), teddy bears and characters from Sesame Street (example below; 2005) can be viewed online. Here's Bert and Ernie, with Metro Manners Lesson 5: 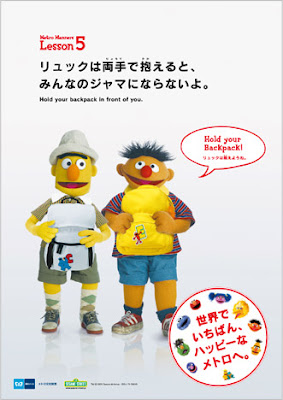 'Hold your backpack in front of you.'

Posted by Maryanne at 1:02 PM No comments:

View from the Windsor House back stairwell 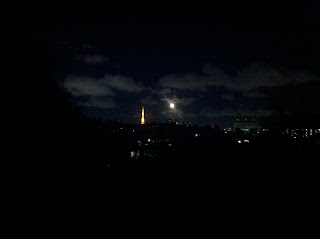 By Gordon Fairclough and Patrick Barta
The Wall Street Journal : ASIA
September 14, 2011
Click here to read the article on WSJ.com
RIKUZENTAKATA, Japan—Efforts have largely stalled to rebuild cities and towns along Japan's northeast coast that were smashed six months ago by a cataclysmic tsunami, as renewal efforts are crippled by political wrangling and the task's sheer complexity.

In Rikuzenatakata, where rampaging waves on March 11 carried off nearly one-tenth of the population and obliterated the downtown, the city center remains a desolate plain. Studding the landscape are the gutted concrete shells of City Hall, a hospital and other buildings.

Workers have pushed most of the splintered wood, tangled steel and other debris into piles several stories high. But there has been no real rebuilding in the low-lying areas that were once the heart of the community. It is unclear when such work will begin.

"Without a plan, we can't do anything," said Eiko Kanno, a 56-year-old housewife whose home, near one of Rikuzentakata's main fishing ports, was obliterated by the tsunami.
Read more »
Posted by Maryanne at 8:08 PM No comments: 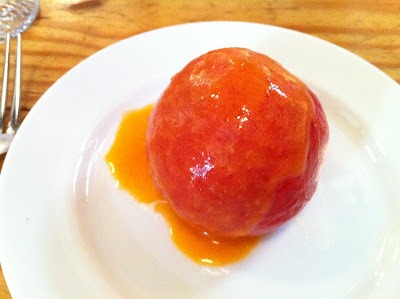 This is the tomato salad starter at Grill Tsubame in Ebisu, one of several restaurants on the 6th floor of the Atre mall above the JR station. The tomato is peeled (like a grape - unnecessary, but nice) and coated in ginger-carrot dressing. There is shredded daikon hiding underneath. Fancy fancy. Totally unexpected addition to, and the best part of, my straightforward grilled salmon with rice lunch special.

When we first moved here I thought I'd try to avoid eating in shopping malls but the truth is, when it's like Miami in August out there, and you're on your way to catch a train or just stepped off of one, these clean, spacious and air-conditioned dining halls can be very appealing.

Posted by Maryanne at 8:17 PM No comments:

from The New York Times


MINAMISANRIKU, Japan — Six months after Japan’s deadly earthquake and tsunami, the naked steel frame of the former Disaster Management Center stands like a tombstone over the flattened field of weed-covered debris that was once this town’s center. People come from near and far to pray before the three-story structure, turning it into a shrine of sorts for the town officials who died here.

Amid the white flowers, smoldering incense and bottles of beer and whiskey left to comfort the dead, there are also signs of rancor. A long handwritten letter, laminated to shed the rain, criticizes the failure to tear down the structure as callous disregard for the families of those who perished.

“This thing should be destroyed right away,” demands the letter, which is signed by the father of a victim.

The people of northeastern Japan won global admiration for their stoic dignity and communal spirit after the disaster on March 11, which ravaged hundreds of miles of coast and left more than 20,000 people dead or missing and hundreds of thousands homeless. But these days, that unity is fraying amid frustration in remote towns, like this one, that feel left behind.

In some of the tsunami-stricken areas, particularly the more prosperous regions closer to the city of Sendai, the removal of millions of tons of debris is progressing rapidly. Large improvised disposal facilities are grinding up broken concrete and wood into landfill material for reconstruction. But in the poorer fishing regions farther north along the mountainous coastline, many towns have barely finished the first basic tasks of survival.
Read more »
Posted by Maryanne at 1:51 PM No comments: 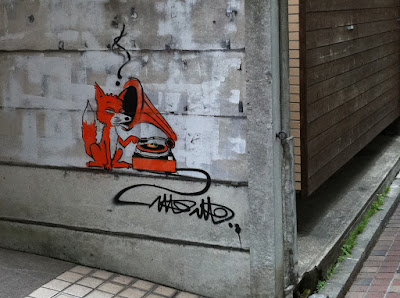 some groovy wall art spotted near the Nakameguro canal
Posted by Maryanne at 12:51 PM No comments: