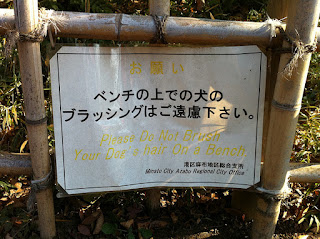 Please Do Not Brush Your Dog's hair On a Bench
And this is because.... ?? Don't mean to quibble; I don't have a dog, and maybe the ban increases my chances of finding a place to sit whenever I think to go to this quiet and rather lovely area of the park, a clearing surrounded by woods, away from the pond and the playground, but I'd love to know the thinking behind it. What am I missing? 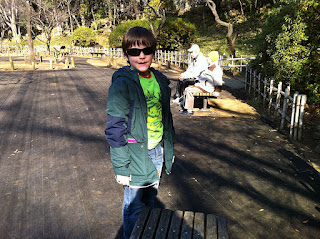 Last time the boys and I were in the park we noticed that some winter berries, purple things the size of BBs, had sprouted on some of the bushes. The elderly couple, in the background behind Dylan, above, are just sitting and admiring. I guess I can see how brushing a dog could kill the mood.
Posted by Maryanne at 12:08 PM No comments: 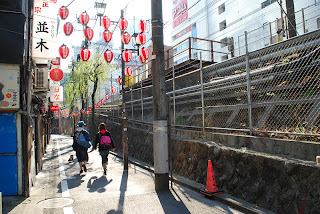 Walking south along the JR train tracks, standing bars up ahead on the left
Posted by Maryanne at 3:29 PM No comments:

A couple months ago, when there were still some autumn leaves on the trees, KT and I spent some time in Aoyama cemetery to practice some new skills we had learned from the brilliant photog Alfie Goodrich. Here are some of my favorite shots from that day. 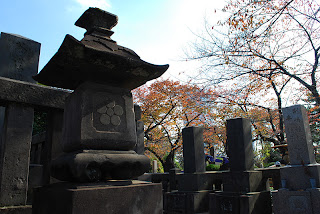 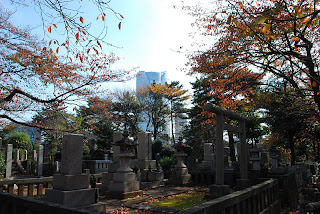 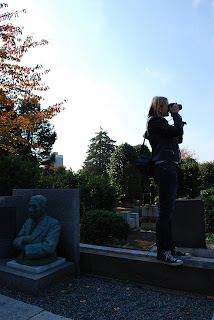 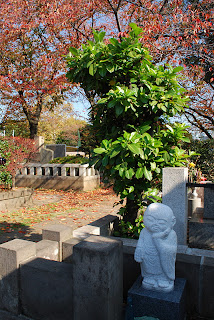 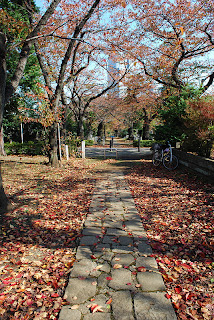 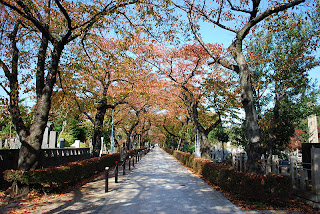 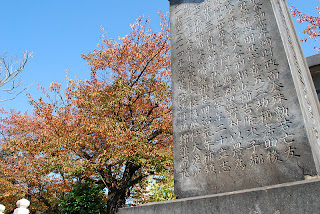 Posted by Maryanne at 3:24 PM No comments:

Happy Year of the Dragon!

A belated Akemashite omedetou to all. It's tatsu doshi!

The 12-year cycle of zodiac animals, junishi in Japanese, is, like many aspects of Japanese culture, a concept copied/stolen/borrowed/adopted from China more than a thousand years ago, and then altered/improved/bastardized.  My son Conor was born in a Year of the Dragon - the last one, 2000 - so it's his year. Dragons, it is said, are strong and powerful and wise, nonthreatening but also not shy, who like to talk and get things done. They can be hotheaded yet compassionate. (It does seem to fit...)

Our other son was born in the Year of the Horse - which means he's independent and a hard worker, friendly but sometimes selfish; energetic, with a mind of his own. He likes nothing more than to run free about the countryside, because, well, he's a horse. (Not bad.) Terry and I are Roosters, which means we're shrewd dreamers. If you believe this stuff...
Posted by Maryanne at 8:03 PM No comments: