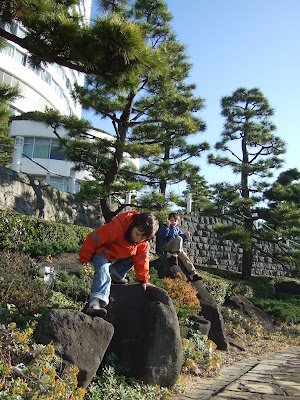 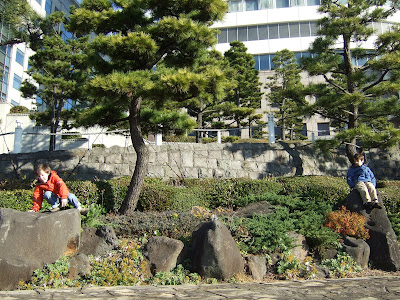 Third day here and everybody seems to have snapped out of their jet lag funk. The boys and I were at the breakfast buffet at 6:30 am and then checked out the New Pier, which is right outside the hotel and a lot like Battery Park City, with fancy restaurants behind glass walls, landscaped promenades and passenger ferry docks. It's in the 50s and sunny and the boys are running and laughing and climbing on rocks...

We decide we have enough energy to go to IKEA, but before we head to the train station the boys and I make a quick stop at the am/pm (think 7Eleven) to load up on snacks: fruit-flavored hard candies, juice boxes (mango!), Starbucks iced latte, McVitties digestives (those yummy biscuits with milk chocolate!), a bag o' grape "G Fresh" (gumdrops in the shape of a soda bottle that taste like sourpatch kids) and some potato rings (worse than pringles, but you can wear them on your finger). It's an embarrassing bounty of crap but the boys were freaking out a little and I needed to distract them (ok, bribe them). Good to know there's no shortage of junk food here.

IKEA is basically a success: we get the boys bunk beds (the same metal frame one they had in New York) and desks (small white tables with adjustable-height legs), and we also pick out a dining room table and chairs. We had to change trains twice and take a shuttle bus and then we took the wrong bullet train home, but the boys did get to play in a ball pit and we all made it back to the hotel without injury, and with some new pillows and comforters and a few other odds and ends. Let's face it, IKEA always seems like a good idea...until you find yourself trying to load boxes of assembly-required furniture onto a runaway flatbed cart without flattening your children (or yourself). In that way, and really in every other way, from the Swedish meatballs to the big blue plastic shopping bags, IKEA Japan is just like IKEA New Jersey, strangely comforting in its consistency. I hope not to return any time soon.
Posted by Maryanne at 7:31 PM No comments:

We are sleeping. A lot. All of us. It's the jet lag of course but I also drank some children's cough medicine and lost an entire afternoon. This morning we went to Muji, a department store in the Ginza shopping district (5 minutes away on the Yamanote line) that is half Target, half Ikea, and decided on some squarish bean bag chairs and a charcoal couch/day bed with back cushions that literally flip out of the way to make room for sleeping. It's a start.

Being in this hotel (and it's a very nice hotel, the Intercontinental Tokyo Bay, and we have a beautiful view of the bay, a bridge, and part of the Tokyo skyline) feels a little like a hospital stay after giving birth. You know this major life event has happened, that everything has changed and you'll never be the same, and yet the reality hasn't set in, there's a delay, a reprieve, before you have to deal with the new routines and responsibilities. You're not exactly happy to be in the hospital/hotel, you're a bit bored actually, and ready to get home and get on with it, but it's nice to have somebody else take care of things. I didn't mind when the nurse changed my baby's diapers then, just like I don't mind having someone else clean the room and cook the food now. But it does get old. We're here, but our new life hasn't started yet. We're too jet lagged to deal with much anyway, so we eat, and sleep...

After Muji, we take the boys back for naps. T hits the gym, then it's my turn to go out. I don't go far, just to one of the hotel's restaurants, Wake-tokuyama (promising traditional Japanese cuisine) and sit alone at the counter (where is everybody?). I order what turned out to be a tasting menu of sorts, a collection of small items presented to me in pretty little bowls and on pretty little trays. There is miso soup, with tiny cubes of tofu and minuscule button mushrooms; a fish cake wrapped in tofu and deep fried; bream sashimi (slices of raw fish that reminded me of yellowtail but looked like snapper); some sticky rice; a bit of salmon fillet cooked in almonds; shrimp tempura; a cold cube of sweet potato that had the texture of flan; Japanese pickles; some grilled fish (I think it was monkfish) topped with a creamy vegetable mixture; and a hunk of grilled meat that tasted like pork. I skip a couple items, including the shellfish (was it a snail? not sure) and a cup of roe. Dessert is a sweet and sticky blood-red confection that I have to sort of attack with this tiny skewer-like utensil. (The waiter advises me to cut it up first then spear the smaller hunks.) It is served with a perfect cup of green tea.

Tomorrow is New Year's Eve... will we go to a shrine at midnight? We'll see. On Jan. 2 the Imperial Palace grounds will be open to the public and the Emperor will make several appearances throughout the day. Apparently he waves to the crowd from a balcony that's enclosed in protective glass.
Posted by Maryanne at 8:33 PM No comments:

We're here! After landing, etc., we waited a while for a bus that would take us to our hotel. To pass the time we eat soft serve ice cream and watch CNN. Benazir Bhutto has been assassinated.
Posted by Maryanne at 7:33 AM No comments:

Goodbye Brooklyn, We Love You

On the chilly morning of November 18, with just six weeks to go before the big move, we attempt a family photo shoot on the Brooklyn Bridge. Check out our building, the old St. George Hotel, in the background. You can see our northwest-facing windows, one story up and over from Zelda's 22nd-floor balcony. 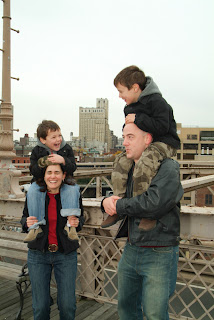 I wouldn't call it a cracker...

Now if you look really close, you can see that this salty snack, an appetizer we ordered one night during our November visit, is really a collection of dried bait fish. See the itty bitty eyes? 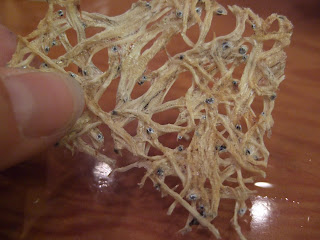 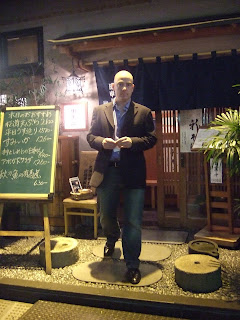 The handsome mug of Tommy Lee Jones, a.k.a. Coffee Boss, appears on vending machines all over town. 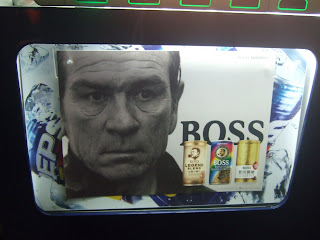 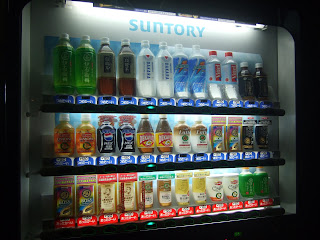 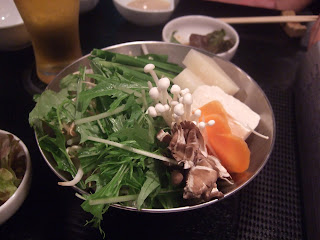 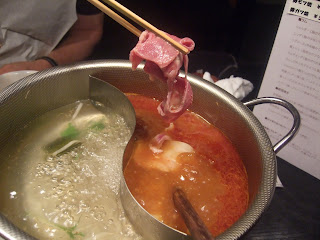 First thing I'm going to buy when we move into our new place: a shabu-shabu set. Here's T about to stick some raw pork into the bubbling broth (the spicy side). http://en.wikipedia.org/wiki/shabu_shabu can tell you everything you want to know about this tasty grub. 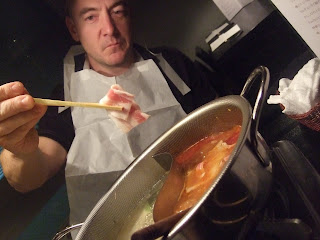 You try it first 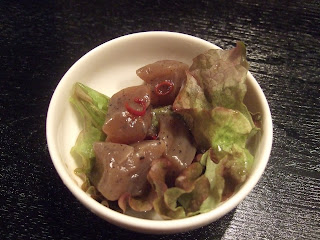 This here is a delicacy called devil's tongue, a.k.a. elephant yam, a.k.a. konjac. It came with our meal, a sort of amuse-bouche. I managed to get a hunk of the stuff close to my mouth, but couldn't close the deal. 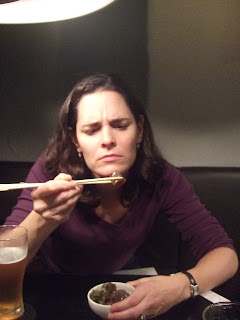 This is the view from the upstairs landing of a beautiful house that we ultimately decided not to live in. It was so fancy it made me nervous, but even more nerve-wracking was the open stairwell. Say hello to Ichi-san, one of five real estate agents who took us around over the course of our five-day house hunt. 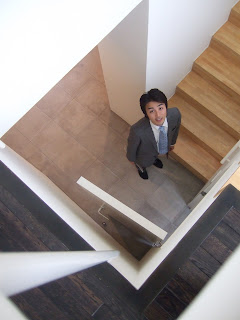