It doesn't surprise me at all that this year's 'king of pizza' is Japanese. I've had some of the best pizza of my life here in Tokyo. (And I'm a 3rd generation Italian-American from New York.) There's Partenope in Ebisu, for example. Outstanding. And Salvatore's, a ubiquitous chain, always excellent, even when home delivered! (I apologize, Joe of Four Corners in Pelham. So sorry, Mr. Fascati of Brooklyn. Get over yourself, Patsy Grimaldi. These guys do it just as well, if not better.)

Here's the story about the Nagoya pizzaiolo who won a recent chefs' contest in Naples, copied off the GVCI (for Gruppo Virtuale Cuochi Italiani, or Virtual Group of Italian Chefs) website:

Pasquale” Makishima triumphs at the International Championship of Pizzaiolo

The Japanese Akinari "Pasquale" Makishima was elected the miglior pizzaiolo (best pizza maker) of the 9th International Championship of Pizzaiuolo Naples-Caputo Trophy. Akinari, who has added ‘Pasquale’ to his name in honour of his maestro pizzaiolo, Pasquale Parziale of the Pizzeria Parziale on Corso Umberto, Naples, subjected himself to a competition lasting two days between 150 pizzaioli gathered together for the occasion of the ‘Vulcano Buono’ (‘Good Volcano’) of Nola near Naples. Second place went to the Neapolitan Vincenzo Caciali and third was won by Vincenzo Sandrico.

At the 8th International Championship, in 2009, Akinari already won third place and was nominated the Ambasciatore dei Pizzaioli Napoletani (Ambassador of Neapolitan Pizzaioli) to Japan. This year among those receiving the ‘title’ Ambasciatore della pizza napoletana nel mondo (Worldwide Ambassador of the Neapolitan Pizza) is Fabian Martin, an eccentric Spanish pizzaiolo from Livia, Gerona who, for the occasion of the Championship invented micro pizze-gelato, with mozzarella, parmigiano and gelato di pomodoro (yes, tomato ice-cream!).

For the organizers, presided by Sergio Miccù, who is responsible for the Associazione Pizzaioli Napoletani (Association of Neapolitan Pizzaioli), this Pizza Festival was “a true success in the number and quality of the participants.” From the Japanese delegation 20 pizzaioli arrived in Naples, along with seven French, five Spanish and ten American pizzaioli, among who was the many-time champion, Tony Gemignani.

“Ours is the only Italian championship that awards the pizzaiolo and not just the pizza – declared Carmine Caputo – because the difference is to be found in the skills of the person working beside the oven.” ... 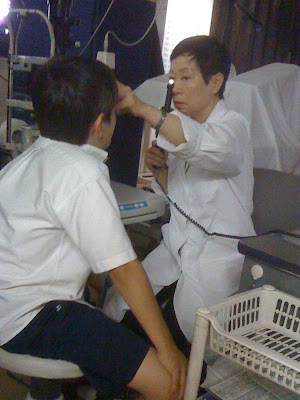 Conor had some very pink, puffy eyes this morning so I took him to an eye doctor, a Dr. Sumiya in Ebisu-minami. She spoke a little bit of English and with my meager Japanese we muddled through. She was great. She had a live video feed going so I could see a closeup of Conor's eyeballs, inflamed capillaries and all, on the TV screen next to his head. After a brief examination she declared the problem "allergic conjunctivitis" (not viral, not bacterial, and not contagious) and took a mini sport bottle and squirted some fluid into his eyes to flush them out, then added some drops and sent us on our way with a prescription for the same drops, which we had filled at a pharmacy around the corner. 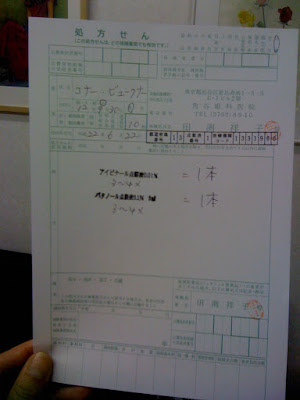 Multiple choice question: The doctor's personal style, whatever was visible under her white lab coat anyway, seemed on the conservative side -- white and navy striped sweater, creased navy trousers, pearl earrings, reading glasses on a gold chain -- but I couldn't help but notice that she was also sporting something that didn't quite fit the profile. Was it:

a) a toe ring
b) a butterfly tattoo on her ankle
c) fishnet stockings
d) motorcycle boots
Posted by Maryanne at 5:52 PM 2 comments: 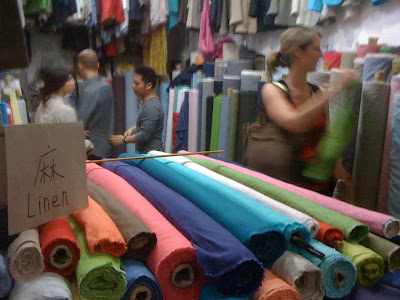 I'm a very lucky girl, because I got to spend four days in Shanghai with some friends while Terry stayed home with the kids. Ordering a few shirts at the fabric market was one of the highlights. That's Brenda in the photo above, holding one of the samples at stall No. 357, the shop where I made my first purchase; the vendor, the guy I struck the deal with, is behind her wearing a gray shirt and fitting a different gray shirt onto another customer.

On the advice of other more experienced fabric market shoppers I had brought one of my own favorite shirts to be copied. But when I first walked into the building I was immediately overwhelmed. The place is a maze, the stalls are jam packed, there are bolts and bolts of fabrics, piled like giant logs or leaning against the wall, every spare inch of the place covered with samples on mannequins and hanging from the ceiling. There are just too many options -- you name it and you can have it custom made: suits, jackets, cashmere coats, cocktail dresses, dress shirts, slacks, skirts, tuxedos. When after maybe 20 minutes of wandering around I came upon this pile of linen you see in the picture and felt ready to do business. I liked the look of the fabric and the colors it came in. The vendor didn't pounce at first sight. I picked out a bright persimmon red and a lilac purple, showed the man my shirt, and the haggling started, with a calculator as communication device. He'd type in one amount, I'd type in another. I think he wanted 360 yuan for two and I managed to talk him down to 240 yuan, or around $34. After we had come to an agreement -- it took several minutes, during which the guy slowly and repeatedly shook his head, as if I was ruining his whole day, forcing him to take so little for his hard labor, a very effective tactic, at least on me -- I was given a receipt of pink tissue paper with "Shanghai South Bund Soft-Spinning Material Market" printed across the top, and the address of the building, No. 399 LujiaBang Rd., typed on the bottom, and the specifics of my order written in Kanji. He stapled his business card to it, which read Ji Bao Tian, as well as small snips of the material I had chosen, and I gave him a deposit. If I had lost this piece of paper, it's unlikely that I ever would've found my way back to him two days later to pay up and collect the goods.

Before fabric market fatigue drove me back out onto the street, where ladies were selling costume jewelry laid out on blankets and sheets spread all over the sidewalk, I managed to put in a second order, with Lucy from stall No. 219, for three sleeveless tops, all in the same style (another copy of something I already owned) but in three very different colors/patterns, in silk (or a convincing imitation of it), for 560 yuan, or about $80. In that transaction I totally buckled early.
Posted by Maryanne at 11:11 AM No comments: 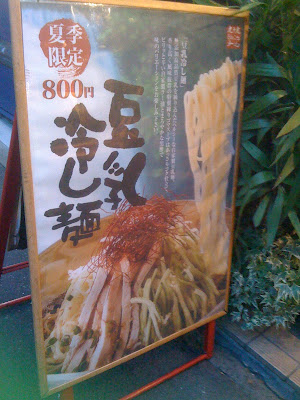 It's not officially summer until we can get the cold sesame noodles with chicken and cucumber at the popular ramen joint down the road. I wish they had it on the menu year round. 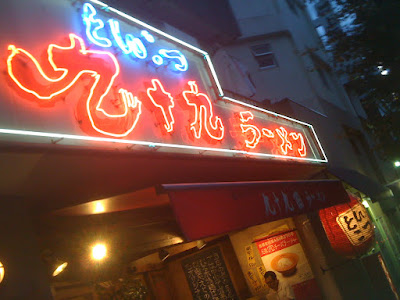 Tukumo Ramen is on Komazawa dori next to Ebisu Prime Square, up the hill a bit from Shibuyabashi. There's always a queue around lunchtime.
Posted by Maryanne at 7:11 PM No comments:

how does one become a member? 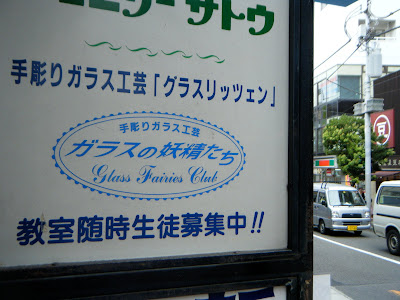 Office building somewhere in Setagaya-ku (I Googled "Glass Fairies Club" but got nowhere...)
Posted by Maryanne at 11:57 AM No comments: 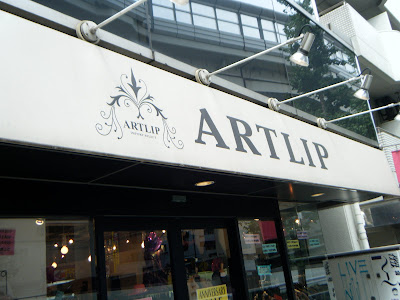 storefront in Sangenjaya
Posted by Maryanne at 11:54 AM No comments: 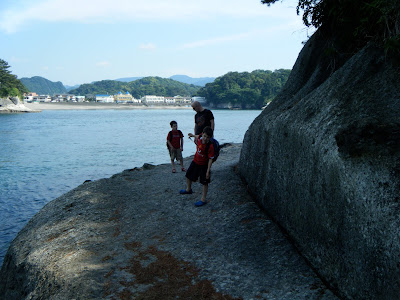 Friday, June 4, 2010
A few weeks ago the four of us spent the day in Dogashima, on the west coast of the Izu peninsula, on the Suruga Bay (not far from Shimoda, the beach town on the east coast, the Pacific Ocean side). There are some truly beautiful cliffs and sea caves there. The boys were even impressed... 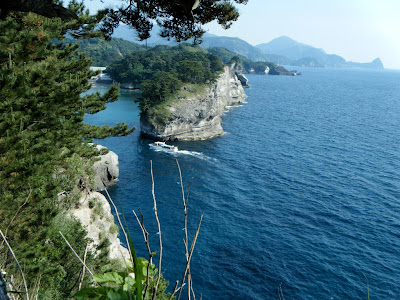 To get there: first there's the 2.5-hr express train ride from Tokyo (JR Tokaido line from Shinagawa station, nonstop through Atami) to Shimoda station (station name is actually Izukyushimoda, important if you're sorting routes using Hyperdia.com). From there we hopped onto the No. 5 bus, which leaves twice an hour, I think, and takes about 50 minutes (you can buy tickets from a counter in the station), traveling along mountain roads, past rice paddies and through a few small villages, very scenic and surprisingly pleasant for a bus journey (the boys had water, snacks and their DS'es, of course, otherwise, I'd be singing a different tune I'm sure).

There's a causeway linking the mainland to one of the little offshore islands, and in low tide it's a bridge, and a place to find hermit crabs, etc. Sadly our timing was off for that, so we settled for a brief trail walk and the 20-min sightseeing cruise. Totally worth it, for the view and the thrill. One sea cave had a natural skylight, letting the sun shine in from overhead -- see last photo below.. 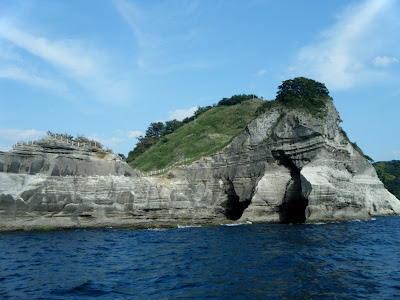 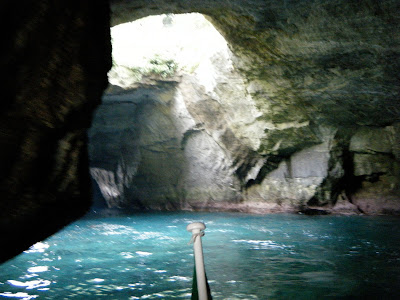 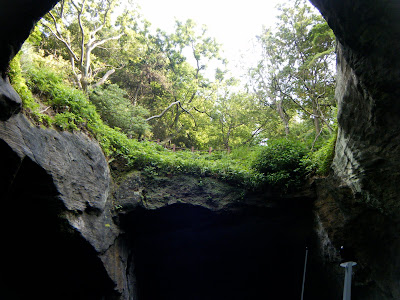 If you've got a weekend in Shimoda already planned and can steal away for that extra day, go! We arrived in Dogashima around 2:30pm on the Friday and were still back in Shimoda in time for dinner.
Posted by Maryanne at 12:16 AM 1 comment: 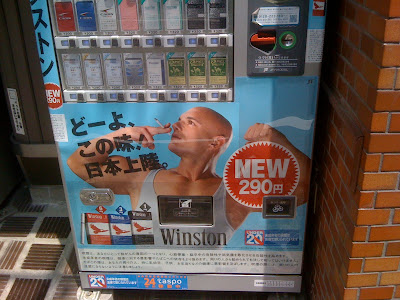 Somebody please explain this Winston campaign to me.

It just seems... counterintuitive. On many levels. 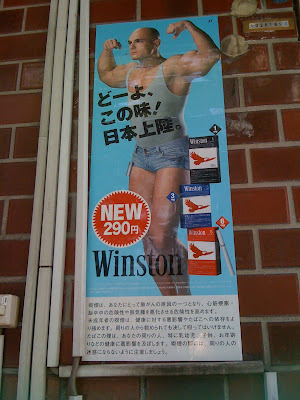 put on some tights and relax, boys

Six men intensely arrange flowers in their class at Ikebana Sesshu-ryu on a mid-March weekday evening. Five of the men, in their 20s to 40s, are in business attire for the class, which started a year ago.

Kotaro Matsukawa, 30, who works at an insurance company, attends the class three times a month on his way home from work. "Flowers calm me down--at the office, I'm always on the phone or at my computer."

Recently, more and more men are attending cultural classes typically associated with women. According to Gishio Horiuchi, 48, lecturer at Koomon--a Nihonbashi, Tokyo, club that offers tea ceremony lessons, including introductory classes for men--about five dozen men are enrolled in the class, a 20 percent rise over the past two years. Horiuchi said the majority of them are white-collar workers.

Horiuchi said, "I think there are a lot more men now who want to develop their senses, rather than cling to economic values, in light of the current economy."

Another appealing aspect of these classes is their approachability.

Among the women in a ballet class in the basement of an office building near JR Akihabara Station, a number of men wearing tights and black ballet shoes pose clumsily as they try to raise their legs high into the air.

Men account for more than half of the 33 students at Ballesonance Tokyo Ballet Studio, which opened last June.

The school has a supply of large ballet slippers, as well as deodorant for the men, to make it a more pleasant atmosphere for the women in the class.

Ballet is growing in popularity among men, prompting the school to add another class in Meguro Ward, starting April 2.

Hospital worker Tatsuya Yamamoto, 30, said: "It's refreshing to move my body to beautiful melodies; it's good for working off my stress from work."

Posted by Maryanne at 8:21 PM No comments: 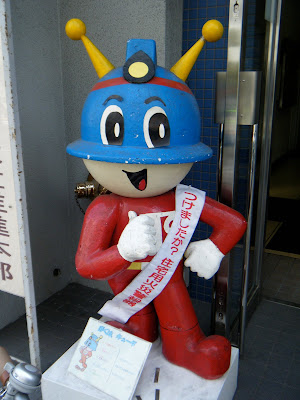 Posted by Maryanne at 1:23 PM No comments:

I did not know this

Apparently those who work for the Keihin Kyuko line (electric train service from Tokyo to Yokohama, Kawasaki and other destinations) are subjected to a morning "smile check." Read about it here
Posted by Maryanne at 12:39 PM No comments: 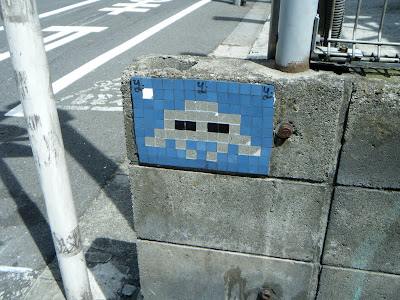 Posted by Maryanne at 5:41 PM No comments:

Mickey Mouse is your super star. 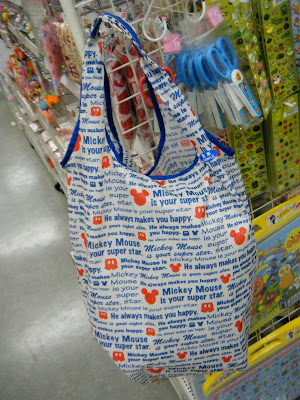 Or so says this handy shopping bag, available in a Kappabashi shop that Brenda and I wandered into yesterday...
Posted by Maryanne at 12:07 PM No comments: