Every year on Dec. 14 there's a memorial event honoring the Vendetta of the 47 Ronin, masterless Samurai who on this day some 300 years ago performed ritual suicide after avenging the betrayal of their lord (who upon being betrayed committed seppuku, leaving them masterless). First there's the Gishi-Gyoretsu, a procession of volunteer Ronin-reps (bearing some very long swords) through the streets of Tokyo, along Showa dori and Sotobori dori and Hibiya dori, with a stop at Zojo-ji and then on to the Sengaku temple in Takanawa, Minato ward, burial site for the real ones.

Terry and I caught up with the group in Tsukiji, near the Chuo ward office, just as they were starting out around midday, and we followed them for a bit until Terry had to go back to the office. Some pics: 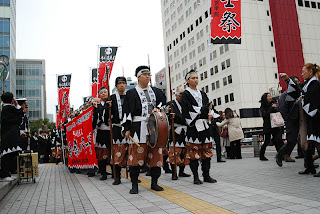 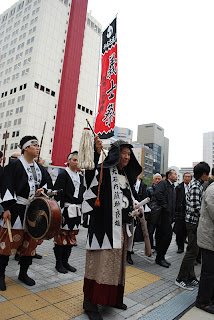 dude in the cool helmet, leader of the pack, waiting to cross the street, spots me with my camera... 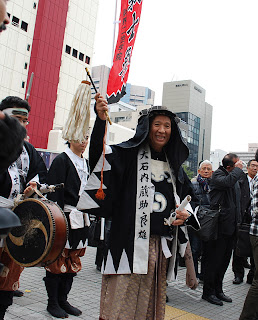 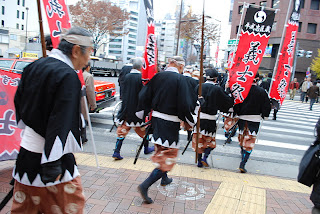 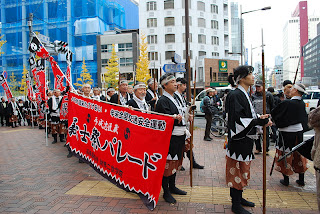 I read online somewhere that "The Forty-Seven Loyal Retainers in Akoh" is one of the best loved tales in Japan, told and retold in movies and TV dramas and in Kabuki theater; the plays and novels that recount the legend usually go by the titles Chushingura ("The Loyal Retainers") and Akoh Roshi ("Akoh's Masterless Samurai").

Not for nothin', but Robert DeNiro learns all about the 47 Ronin from a French guy who paints miniature samurai figures (and gives him a safe place to recover from a bullet wound) in the 1997 John Frankenheimer film Ronin, which we just watched for the 5th or 6th time the other night (we were taking a break from Season 2 of The Walking Dead). If you've never seen it, rent it, there are some terrific car chases.
Posted by Maryanne at 7:31 PM No comments:

silly purchase of the month: the 'Poodleg' 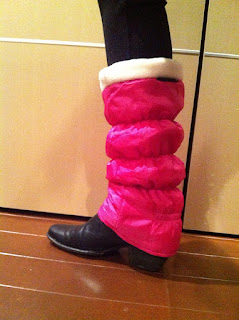 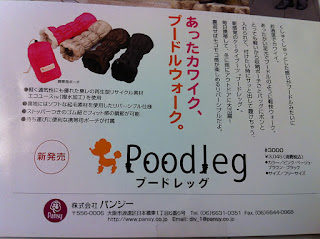 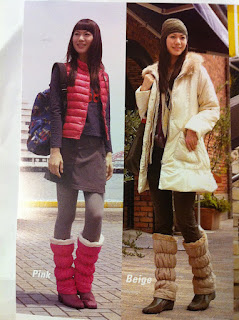 Available now at the Pansy shop on Aoyama dori. It's near the Crocs store, between the Children's Castle/U.N. University and Kotto dori. Because I know if you're in Tokyo you'll want to run out and buy a pair for yourself right now.
Posted by Maryanne at 3:29 PM 3 comments:

re: previous post, this "Let's..." business is everywhere. Big thanks to Katy Dix for finding these gems...and sending me these pics: 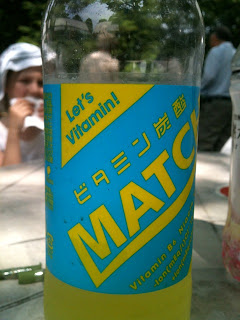 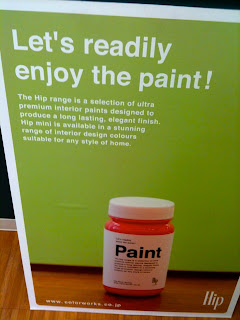 From my dentist's office: 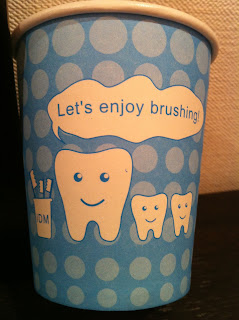 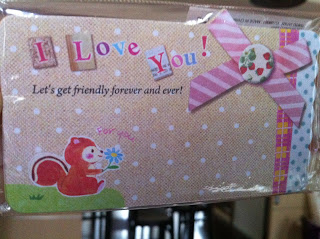 "Let's get friendly forever and ever!"
Posted by Maryanne at 9:49 PM No comments: 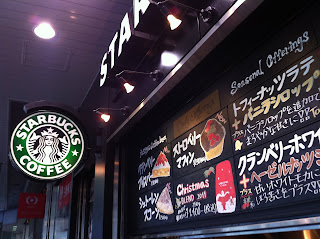 Ah, Starbucks and Christmas. Christmas and Starbucks. Is there a better seasonal marketing campaign than the "Let's ...." series? I don't think so. 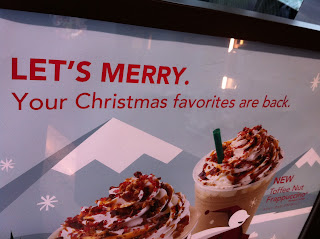 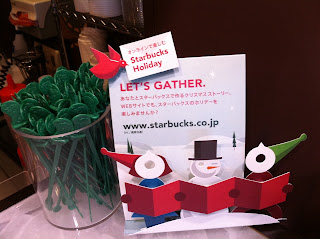 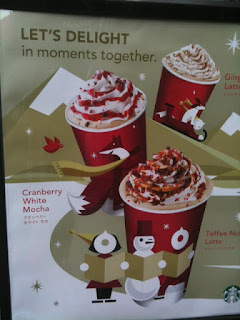 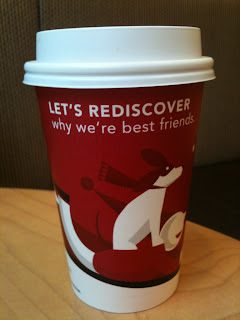 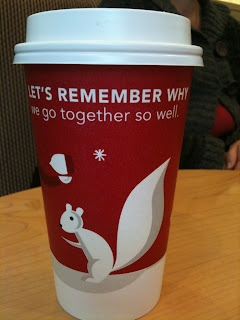 Less than 2% of the population of Japan is Christian but that doesn't stop this country from celebrating the season with Santa outfits, poinsettias, and fir trees with all the trimmings. Sometimes in pink and purple...blue and silver... gotta give "Starba" (is this British shorthand or universal? help me here people) credit for going with traditional red. 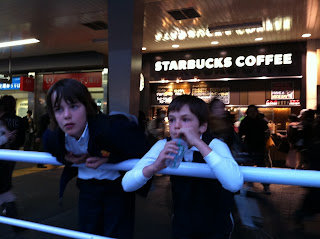 Posted by Maryanne at 5:57 PM No comments:

One of the tough things about being an expat kid is that every few months or so, you're saying goodbye to one of your friends. Not surprising, really; the expat community is by nature transient, with families moving in and on with regular frequency, as jobs change, international assignments end, or, as is more often the case these days, companies shut down or make employees redundant. Lately, though, what seems to be spurring some families to go is a weariness - parents, primarily mothers, sick of worrying about their kids' health and safety in post-March 11 Japan. Specifically, nagging concerns about food, whether it's contaminated, how much can you safely eat if it is, etc.

That's not to say that this subject still dominates coffee morning conversation. It doesn't. (Seems bullying at school is the new hot topic.) I think people here have come to accept a certain amount of risk, and anyway, nothing serious (as far as I know) has been detected in Tokyo save for the occasional report of, say, radioactive Cesium found in Meiji-brand baby formula.  It's important to note that in this particular case the levels detected in the product were far below the government limit, though try telling the mother of an infant that a little Cesium is O.K.

Same with mothers of older kids. I don't want to give my kids even a little Cesium 134 or Cesium 137 or any other isotope that "may" increase their risk of cancer later in life. Key word "may" as the long term effects of low-level exposure are still not known, not in kids or adults. At a safety briefing at school a few weeks ago, we were told that it's still unclear whether young developing bodies, because they are young and still developing, are more vulnerable, or more resistant to harm.

So we've become vigilant about reading labels on the produce and meal and milk, avoiding anything that comes from Fukushima (if the store even carries it, which many have started to, as a show of support for the poor Fukushima farmers) and the areas around it. I try to buy items from Kyushu (down south) and Hokkaido (north). Of course, we're told that food can be re-routed and labels marked with only the most recent location rather than the true origin; that a little contamination is permitted under government regulations, so producers could be mixing a little bad in with the good, to keep the overall supply within acceptable range (though Meiji's actions in recalling 400,000 cans of tainted formula is encouraging); and, even in a country with strict standards and an above-average safety inspection system, that it's impossible to test all food in any comprehensive, effective, reliable way.

So we worry.  I can't imagine there's anybody who doesn't think about it whilst picking up a head of broccoli or lettuce. I know that many who once shopped at their local green grocer now almost exclusively shop at the international supermarkets and pay more for imported produce; some have stopped buying milk altogether. Some keep a list of the kanji for prefectures to avoid in their handbags.

Long-time expats here (non-Japanese friends who've been here well past your more typical 3 to 5 year stay, in some cases longer than a decade, their kids born and raised here) often say that for the children, it's always harder to be the one left behind. Dylan would probably agree. His good friend Edwin has just gone, and it's hit him pretty hard. In the last three years he'd been over to ours countless times, for play dates and sleepovers; the boys had done "Swim Friends" and tennis lessons and karate classes together. When Dylan took a few friends out for Korean barbecue to celebrate his 8th birthday, Edwin was there. He's a great kid, and we'll all miss him.

Best of luck to you, Ed! 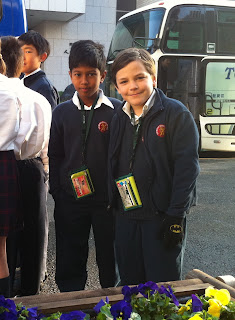 It's common now for Japanese companies to regularly measure employees' waistlines and demand they stay fit, else they be fined by the government. Some offices pump 'exercise music' over loudspeakers, as a way to encourage workers to periodically rise from their cubicles and move a little.

Let this mechanical guy be an inspiration to salarymen everywhere. 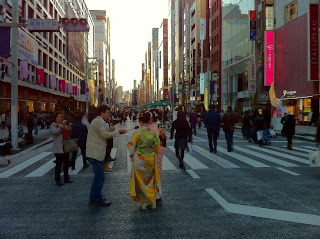 Chuo-dori, near Harumi -dori, the heart of Tokyo's posh Ginza shopping district, around 4 p.m. on December 4
Posted by Maryanne at 7:28 PM No comments:

Tokyo Metro, reminding us how to behave

Drunk on the train? No sweat, just be sure to stay upright even as you pass out... 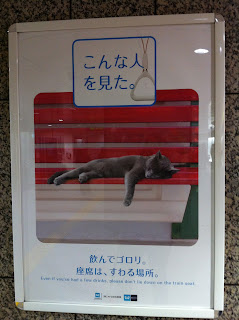 Actual English tagline: 'Even if you've had a few drinks, please don't lie down on the train seat.'
Posted by Maryanne at 8:53 PM No comments:

December arrives, and brings winter with it 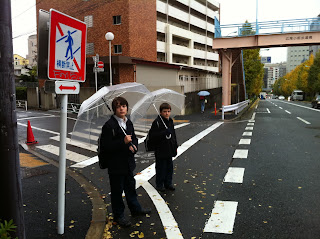 December 1st: The boys on Komazawa dori, waiting for me to hail a taxi to take us to school; it's a chilly wet Thursday morning, and we're running a little late...
Posted by Maryanne at 11:20 AM No comments: 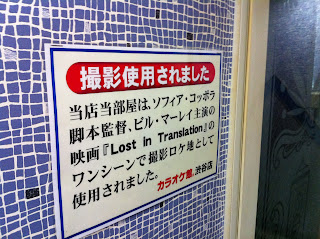 The other night I finally had a chance to check out where they filmed the karaoke scenes in Sofia Coppola's 2003 film Lost in Translation. It's a Karaoke-Kan in Udagawacho, just off Center Gai and a few minutes walk from Shibuya station. Aside from the fact that a few of the rooms - like 601, where the movie was shot - offer amazing views of the street outside, the place is nothing special, really, one of a generic national chain of establishments where, like Shidax and Big Echo, you pay per hour and per person for a private room. I do like the direct telephone line to the bar, and when the waiters stoop on bended knee as not to block your view of the screen. But I need to ask: why are so many karaoke-box tunes accompanied by video footage of the Brooklyn Bridge?

Alas, our small group of four women, arriving at this Karaoke-Kan around 11:30pm on a rainy Friday night in November, could not book 601 (or 602, another room the filmmakers used), but were instead escorted to a windowless space down the hall, so we could have been anywhere. And the song selection fell short - no Adele! can you believe? - which surprised me, especially when just a couple weeks before I had spent half an hour in a karaoke room with the kids at EST, also in Shibuya, on the east side of Meiji dori across from Miyashita koen, and they had everything. EST also has ping pong, billiards, bowling and a videogame arcade - a post for another time. (And is it pronounced "est"? or "ee-ess-tee"? Anybody?)

As we were leaving to go home around 1 a.m., we saw that 601 was vacant and so stepped inside to snap a few.  I've been hearing Bill Murray singing Elvis Costello in my head ever since: "What's so funny 'bout peace love and understanding..." 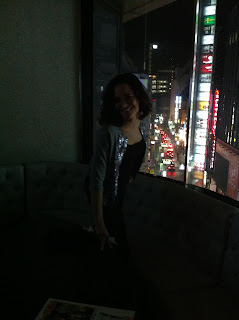 Ya think Bill stood right here, in this same spot?!??
Karaoke-Kan, 30-8 Udagawacho, Shibuya-ku, Tokyo. (Located northwest of Shibuya station and the big scramble crossing, on the same road as the big Coach, Loft, HMV and Zara stores; if you are walking with Coach and Loft on your right, HMV and Zara on your left, the building will be ahead on the left hand side before the police office/koban, where the road bends to the north toward Tokyu Hands.)
Tel: 03-3462-0785
Open 11 am to 6 pm
Posted by Maryanne at 8:57 PM No comments:

fun fact of the day

Among Japanese households, the most popular meal on Christmas day is... wait for it... fried chicken.

Buckets of KFC takeaway, in particular. 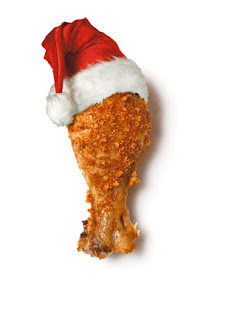 Image borrowed from Metropolis)
Posted by Maryanne at 5:53 PM 2 comments: