we don't drive here but we take lots of taxis

Click here to watch "Driving Through Tokyo," a fascinating if slightly disorienting Vimeo clip by an expat kid here who calls himself Omi San that will give you a really good feel for what it's like getting around in this city...

Also for your viewing pleasure, a Flickr photo of Shijuku at night called Urban Energy, posted by Surrealize... 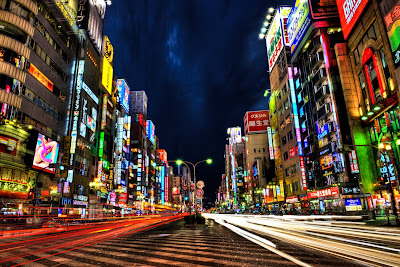 Posted by Maryanne at 1:02 PM No comments:

making do in the big city 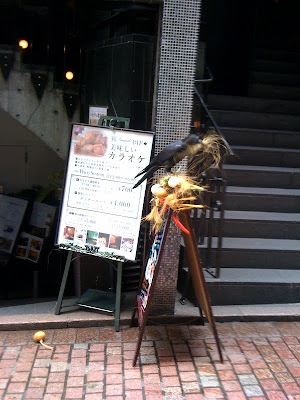 Walking through Shibuya early this morning, I passed this black crow, hard at work ripping apart some restaurant's ill-advised sandwich board adornment. Totally logical, as the straw (a bit of cornucopia?) is, of course, ideal nesting material. Who can blame this bird for grabbing it? I was quite impressed with the way it was pulling and twisting the stuff free with its beak while maintaining its perch and keeping a sharp eye on any human witness who happened past. I didn't stop to observe for long. Them black crows are scary.
Posted by Maryanne at 5:16 PM 2 comments:

I stand by my previous recommendation that travelers take the train instead of the bus from Narita airport into the city of Tokyo, with one very important exception. That is, me, i.e. parent traveling solo with two "high-energy" boys and three very heavy suitcases. The Airport Limousine Bus may hit highway traffic and you might have to sit through multiple hotel stops before reaching your destination, but it's easy-peasy to find it and get on -- no trying to herd the cats while also lugging the big valises up and down escalators, through ticket gates, across platforms, and in and out of the trains during the 10 or 15 seconds the doors remain open. You just wheel that Smarte Carte out of customs and through the terminal front door and let the courteous and totally competent attendant/bus baggage handler take over. (This is Japan, after all, a country that seems to me to have set the gold standard for customer service. Returning from a two-week trip to New York this past weekend -- it was the boys' Easter break -- I nearly embraced the man who thus unburdened me.

I'm not exaggerating. It was a revelation. I always feel so alone on that Narita Express platform. Alone and annoyed, at my boys who don't stand back from the edge, and those train doors that only stay open a few moments while I shout "LIFT! ROLL! LEAVE IT AND GO FIND YOUR SEAT!" like a Crazymama. But on Saturday, I was practically serene. I never knew if we hit traffic or not. It didn't matter. I was dozing, the boys were DS-ing. And when we arrived at The Westin hotel in Ebisu, a 5-minute taxi ride away from home, I think the boys and I wheeled the three mammoth bags about 6 ft. before a nice man wearing a cap lifted them into our cab's trunk.

I used to pooh-pooh (or is it poo-poo?) the "limousine" coach because I so love love love the trains here, I really do (in terms of cost the difference in fares is negligible: 3,000 yen for the bus vs. 3,300 yen for the Narita express), but I have seen the light. If you don't have kids or much baggage with you, I still say N'EX all the way, but from now on I will be catching that coach.

Unless Terry is with me, because when he is, he does all the heavy lifting while I hand out the snacks.
Posted by Maryanne at 5:50 PM 1 comment:

Labels: Narita, out and about with kids

'Please do it again.' 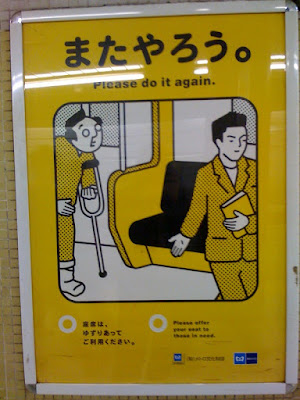 Looks like Tokyo Metro is switching tactics and reinforcing good behavior instead of shaming people for their usual insensitivity. Note the look of absolute shock on the face of the injured gent who's being offered a seat for once. -Terry (guest blogger)
Posted by Maryanne at 10:20 AM No comments: 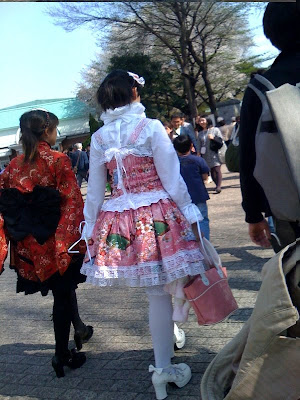 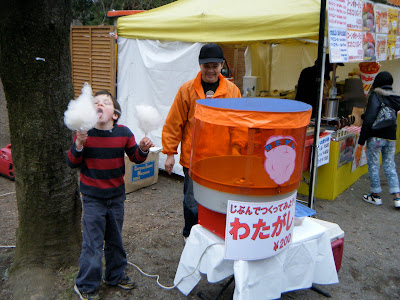 Showa Kinen is our favorite destination playground -- we take the JR Chuo Ome line from Shinjuku to Nishi Tachikawa and spend the whole day. We rent bicycles, follow the path all the way around and don't stop til we reach the Bouncing Dome. From there it's on to the Dragon Dunes and then Rainbow Hammock when it's time for a snack. Last Sunday the grownups were desperate for hot tea and coffee, it was so cold. Here's Ali at the crepe cart. 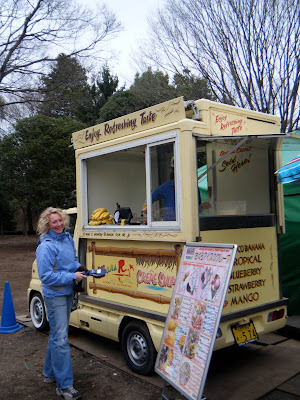 Rainbow Hammock looked like it had been spruced up since the last time we were there. And check out the cherry! 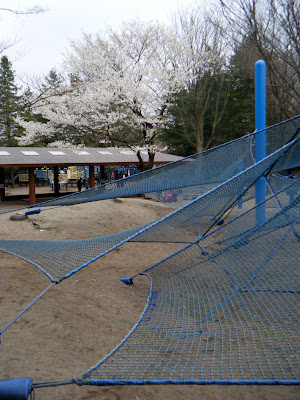 This weekend should be great for cherry blossoms. Only a few had popped when we were there. Lots more on the verge. 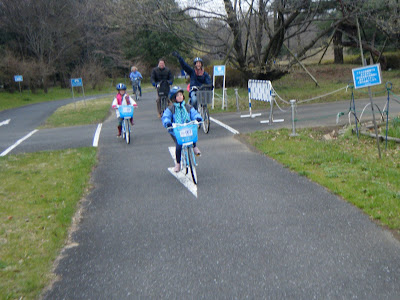 More of the gang from last Sunday 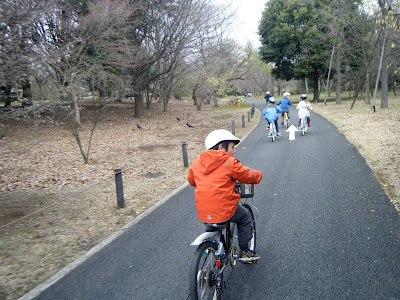 Dylan's helmet, borrowed from the cycle center, looks like a hardhat. 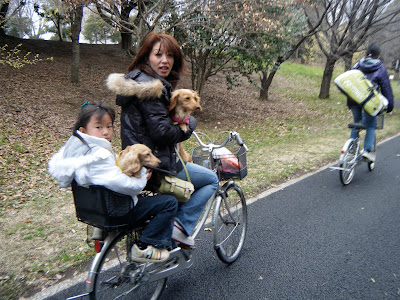 Two dogs along for the ride
Posted by Maryanne at 5:55 PM No comments: This kind of kawaii collectible reminds me that not everything we do (or buy, or think...) has to have deep meaning. Why not keep a plush Smile Slime around. (I happen to have a Smile Slime paperweight.) I've been rather charmed by the cutie-pie culture here, the trend toward the adorable that compels grown men to hang a little Snoopy or Pooh Bear on their mobile phones, young (childless) couples to make a date out of Tokyo Disneyland, and big high school students (or were they 20-something salarymen, in weekend casual?) to play for the better part of an hour with my primary school-aged children on the Bouncing Dome at Showa Kinen park.

For whatever it's worth, the Smile Slime line of toys and pencil cases and you-name-it available at KiddyLand and elsewhere is based on a character designed by Akira Toriyama sometime in the mid-80s for the popular Dragon Quest videogame series. He's supposed to be a drop of water, so as an enemy, he's pretty weak, but he was so popular he later became star of his own spin off game, Dragon Quest Heroes: Rocket Slime. Shall I go on?
Posted by Maryanne at 1:23 PM No comments:

Here's a little something I wrote for Pink Pangea, a travel blog, about seeing the cherry blossoms in Tokyo
Posted by Maryanne at 1:20 PM No comments: 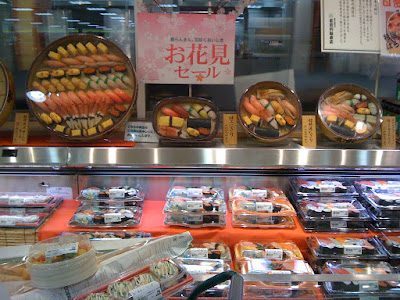 Daimaru Peacock, Daikanyama
Posted by Maryanne at 12:44 PM No comments: