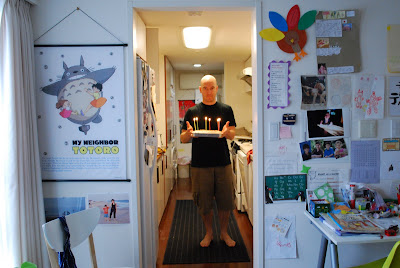 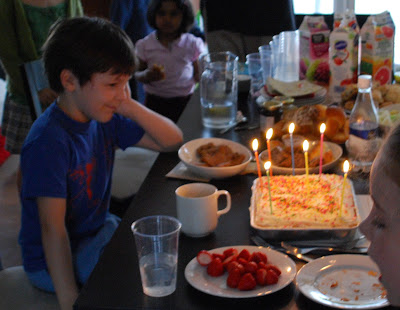 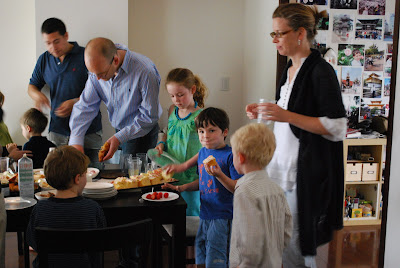 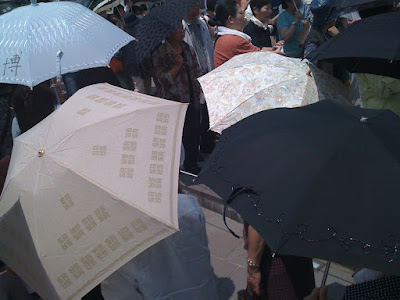 On line to see a special exhibit at the National Museum the other day, my friend Brenda and I roasted in the blazing sun while virtually everybody else kept cool in their own personal patch of shade (it was mainly little old ladies on this particular Tuesday morning). Eventually we were given a loaner parasol from one of the museum attendants.
Posted by Maryanne at 5:28 PM No comments:

For some reason, here in Tokyo I don't hesitate when a stranger offers me candy, as my taxi driver did the other day. "Candy, please," he said, then shut my door, using a hand lever next to the steering wheel. He motioned to a little basket of wrapped taffies hanging off the lace seat cover and smiled. How could I say no? 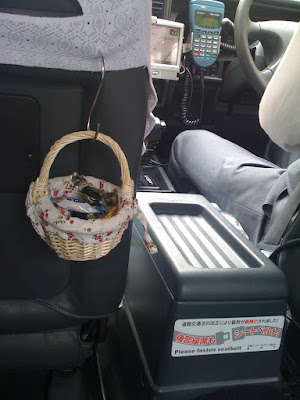 Posted by Maryanne at 5:17 PM No comments:

When Terry and I make a lunch date, it is now understood that we will come here to eat as it is relatively inexpensive and oh so fresh and good: the popular and always packed Midori sushi, in Mark City Shibuya, past Starbucks somewhere between the East Mall and Shopping Avenue (two separate wings of this enormous train-station-and-shopping complex). I'm told there's also a Midori in Shimo-Kitazawa, a 2-story location, the chain's original establishment. I've gotta go! But first need to have someone who reads Japanese take a look at their website for me... 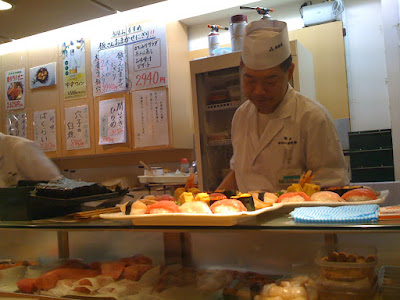 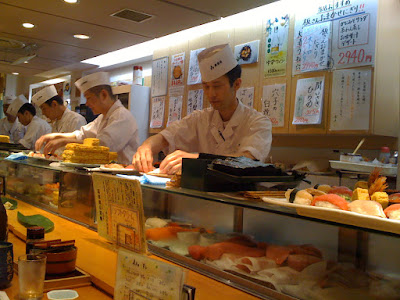 Low point of the day: slipping and falling down - hard - in the rain, just like Charlie Brown when Lucy pulls the football at the last second.

High point: Being told by an absolute stranger, a young woman from California waiting next to me in the queue outside a sushi bar (see above), that I looked like I was in my "late 20s."
Posted by Maryanne at 4:40 PM No comments:

well, my birthday is coming up... 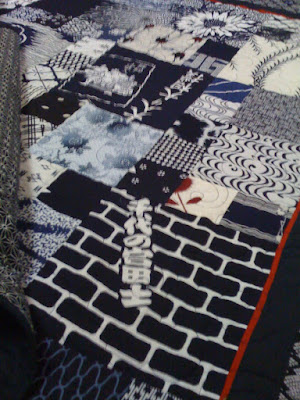 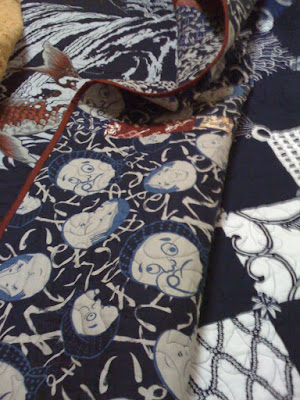 I so want to buy one of Di Conroy's quilts! These photos don't do them justice. She uses a combination of antique, vintage and new fabrics, which she buys in bolts in Nippori (Tokyo's fabric district) or Yuzawaya (a big craft store in Kichijoji I hope to visit soon) or in the form of previously owned yukata and kimono. (Di hosts a monthly craft morning, where I go and drink coffee and eat cake and do a little mending while the others quilt and crochet and knit...). 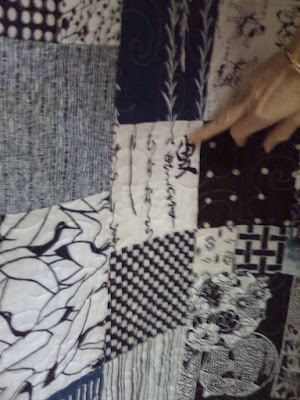 This blue-and-white one's got my name all over it.. 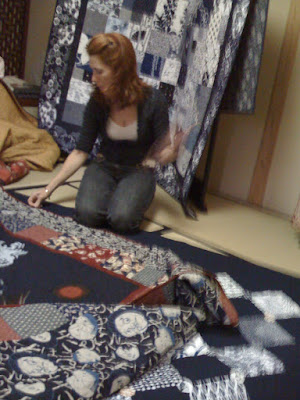 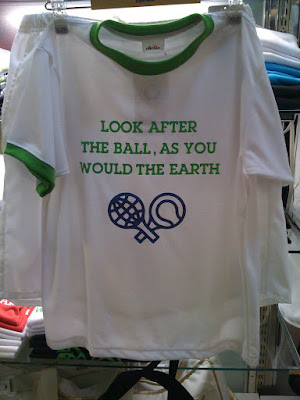 T-shirt for sale at Windsor, a tennis superstore in Shibuya
Posted by Maryanne at 9:21 PM No comments:

outside the Ryōgoku Kokugikan 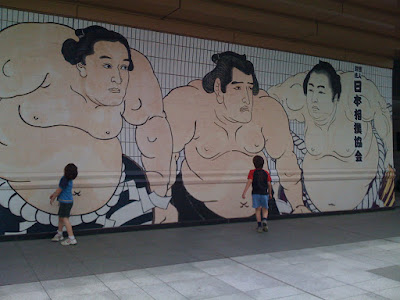 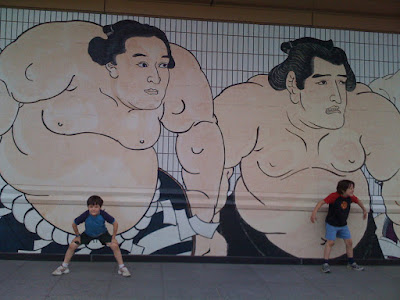 Posted by Maryanne at 8:29 AM No comments:

Oh, the waiting is the hardest part... 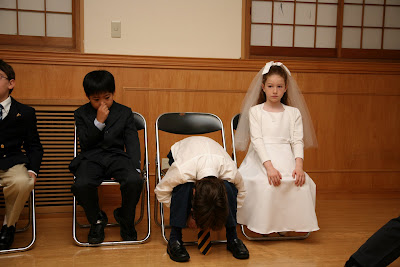 Conor and 39 other children received their first communion at the Franciscan Chapel Center in Roppongi last Sunday. Families were asked to arrive at 8:45 am for the 10 a.m. mass. 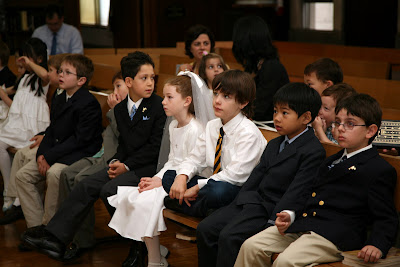 Posted by Maryanne at 8:35 PM No comments:

summer sumo, with kids in tow

Took the boys to the big Ryogoku arena today -- day 10 of the 15-day 2009 May Grand Sumo Tournament -- to catch the early round of bouts.

The place was deserted when we arrived around 10 a.m., and people were still only trickling in when we left shortly before noon, though a crowd of fans was starting to gather along the sidewalk out front to see some of the better-known competitors walk from car to entrance gate in their yukata robes and wooden thong sandals, the sumo equivalent of a red carpet moment.

The competition doesn't really heat up until these more experienced, higher-ranked wrestlers take their turns in the ring later on in the afternoon and evening, but the morning round was entertaining all the same, a fine spectacle, and the kids could muck about a bit more because nobody was nearby enough to be bothered.

With the stadium so empty, we could've planted ourselves right down in front, on seat cushions just outside the ring, but my friend Rena's sweet children had already gotten themselves banned from the area for being too distracting. (Serious points for trying though; she's a gutsier mom than I.)

Even keeping back a bit, we still had a great view. Take a look:

(Before the wrestlers lock horns, so to speak, there's a lot of ceremonial posturing and repositioning and, perhaps, mental preparation....)

In this next clip there's actual bodily contact, but unfortunately my digicam's memory card maxed out before it was all over, with one guy stepping out of the ring.

My very good friend Claire (below) is trekking 100K from Odawara city to Lake Yamanaka this weekend to help raise money for Oxfam (as are several other people from the British school). Brave soul... and maybe more than a little bit nuts...but hey, she's seen some pretty magnificent views of Mt. Fuji while training. 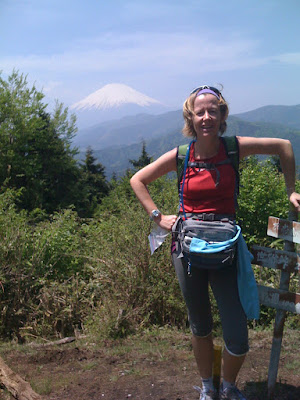 To learn more, visit the trailwalker site. And you can sponsor Claire's team by clicking here!

Posted by Maryanne at 8:10 PM No comments: 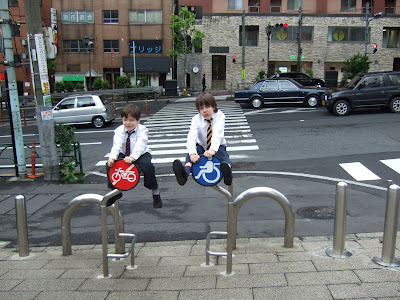 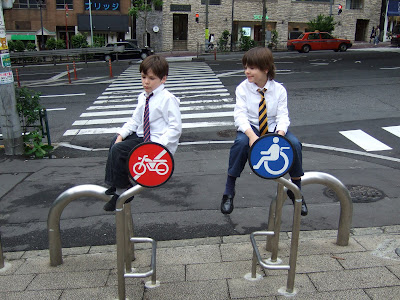 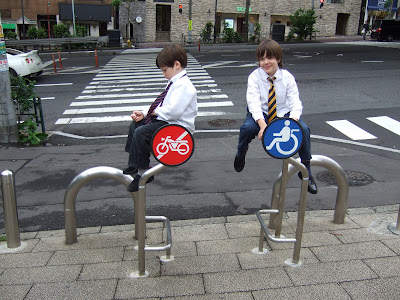 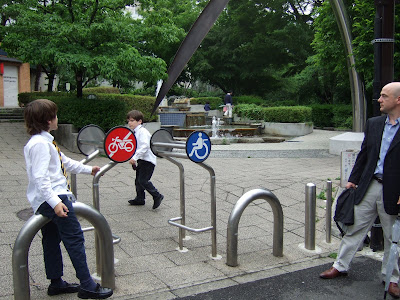 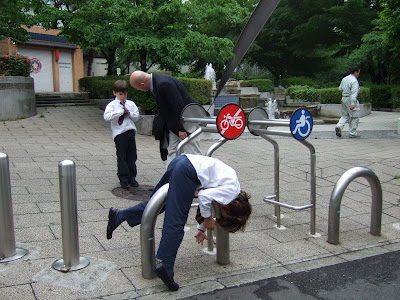 I call this my "Loitering in Roppongi after Church" series (Conor received his first communion today)
Posted by Maryanne at 7:39 PM 1 comment: 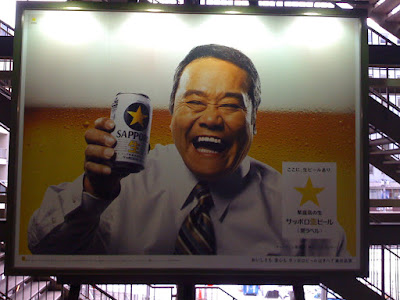 This billboard ad for Sapporo beer, which I spotted hanging above the Shibuya-bound JR platform in the Ebisu station, is crying out for your clever slogan or tagline. Caption contest begins...now! Submit your idea as a comment, or email me at buechner (at) g mail dot com. Go!
Posted by Maryanne at 12:46 PM 6 comments:

at last I found you 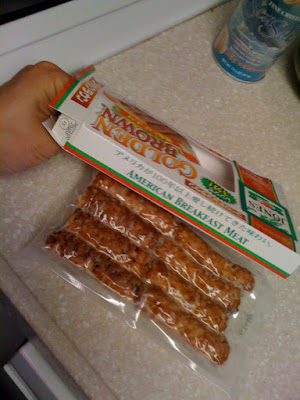 Scored 3 pkgs. of Jones' Golden Brown American Breakfast Meat (a.k.a. "American Juicy Sausage") for about $6 at Costco in Kawasaki the other day. The list of ingredients and nutritional information (such as it is) is printed on the box in Japanese so we can forget about all that fat and sodium and just enjoy! 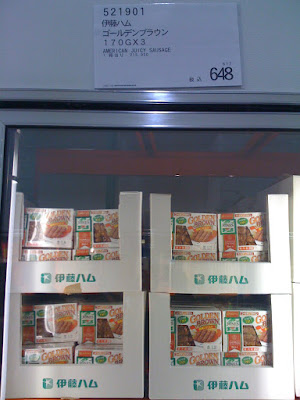 Not for nuttin,' but two American ladies with total Mom Hair (you know the style) were pushing past me with their giant overloaded Costco shopping carts just as I snapped this picture with my phone, and I could swear I heard one say to the other, "I was like that when I first moved here." (Hey, I will be like this until the day I leave, ya smug bitches!)
Posted by Maryanne at 12:27 PM No comments:

2 handsome boys and some schlump 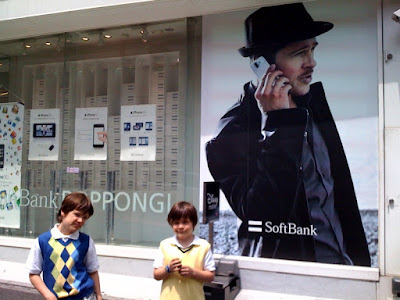 Dylan finally got his haircut today -- after I snapped this photo outside the Softbank store in Roppongi. (I think Brad P. looks hideous in that picture, and it's up all over town. Lose the 'stache, dude.)

Conor continues to refuse to have his hair cut. He argues that if I can grow mine long, why can't he? I have no clever comeback for that one, other than to explain that I do actually get mine trimmed from time to time, so it doesn't "look so messy." He remains unconvinced. He suggests that I give him some product to use in the morning, to help him style it. That should be interesting...
Posted by Maryanne at 6:07 PM No comments:

lazy blogger (me) links elsewhere to entertain and inform you

How to properly wash your hands and other instructions on how to prevent the spread of swine flu, courtesy of Japandra, who actually writes about current events in her blog, like the unfortunate incident of one of Japan's biggest pop stars getting all drunk and naked and arrested in Roppongi last month; as you might imagine, indecent exposure is no laughing matter here.

But back to swine flu. The British School is taking the situation seriously, asking parents to take children's temperatures every morning and banning visitors from the building this week. I drop the kids off at the front door now as they are fine walking upstairs to their classrooms and sorting themselves out on their own anyway so it doesn't really change things for me, but I feel bad for those with 3-year-old kids in nursery (pre-pre-K) who still rely on mom or dad to bring them to the classroom. They'll be fine of course as they will have grownup escorts but I still remember the delicate separation rituals when the boys were smaller.
Posted by Maryanne at 5:32 PM No comments: