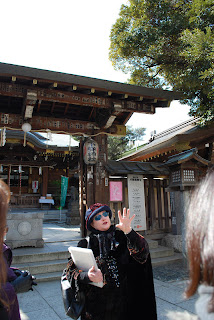 It'd been a while since I had a good ladies' day out, and this one, a "Ghosts and Goblins of Old Tokyo" tour organized by some moms from school, sounded too good to pass up. We assembled one recent bright sunny Wednesday morning outside the Inaricho metro station, one stop past Ueno on the Ginza line, in Taito-ku. From there our guide Lilly took us to all sorts of places, briefing us on temple traditions and regaling us with tales from Japanese folklore. Stops on the tour included: 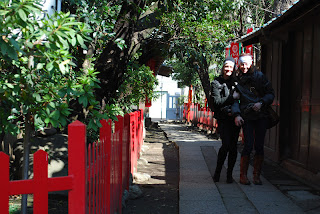 -Hokusai's final resting place. That's right, the bones of the ukiyo-e master who died in 1849 at age 90 are at the Seikyo-ji, a Buddhist temple in Asakusa. The gravestone is engraved with the characters for gakyou ryojin, meaning "old guy, crazy about painting." I happen to be a big fan of The Wave," which Lilly held up for all to see. Then, looking around to make sure the coast was clear, she unlatched the side cabinet door to show us a secret inscription that has Hokusai promising to return "as a ball of light, floating around Tokyo." (A haunting!) 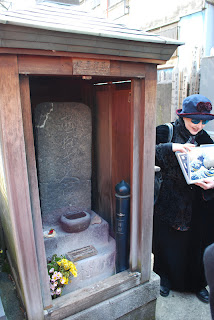 -A kappa shrine in Kappabashi, built in appreciation for the sometimes good, sometimes evil aquatic creatures who, back in the day, help pave the way for the area's commercial prosperity. How did they do it? By helping the locals dig drainage ditches, hence solving a chronic flooding problem caused by proximity to the Sumida river. 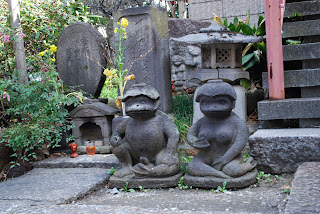 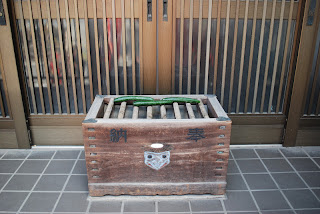 The kappa like to eat cucumbers, hence the offering, above. It's also why the Japanese name for the cucumber sushi roll is Kappamaki.

-statue of a kappa water sprite in the process of morphing into a human boy, which according to legend they would sometimes do when they weren't dragging unsuspecting women into the water to have their way with them, or otherwise attacking people. (Lilly said something about the kappa enjoying a certain tasty morsel of human flesh from a specific part of one's anatomy but I won't say any more, it's too ridiculously gross.) This particular kappa seems harmless though, and the only remarkable thing on this otherwise nondescript 25th block of Matsugaya 2chome, a few steps off the main drag of kitchenware town. 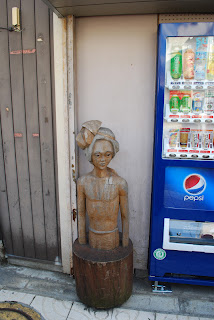 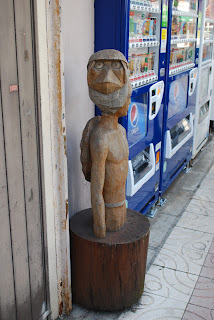 -A hokora (mini shrine) guarded by sacred toads, to whom those suffering from eczema and other skin ailments pray for relief: 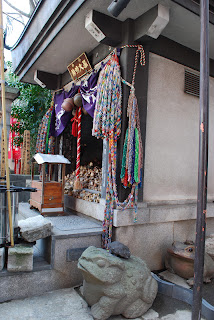 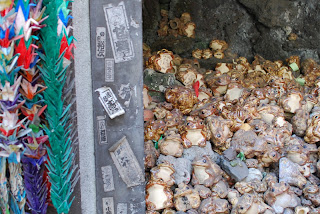 See the toads piled up inside the shrine? each one was inscribed with a message, written in ink.

-the Chingodo shrine in Asakusa, dedicated to the incorrigible Raccoon dog, a.k.a. Otanuki-sama, as he is respectfully called, who is depicted here resting on top of his own over-sized testicles, like a stool. I am not making this up. Lilly said! 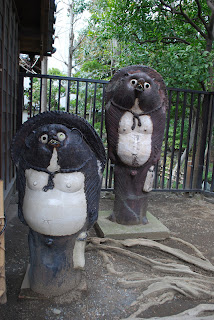 Apparently the shrine was built to appease these rascals, who were known to cause trouble. Legend has it that the locals has to grant them some sort of divine power to protect people from fire, so they had status and would act accordingly. Also on these grounds: a lovely Boddhisattva statue (below). Those tiny babies in protective red caps, gathered at her feet, represent the spirits of aborted fetuses and other dead children. Behind the statue is a private fenced-in Zen garden, accessible only to the nearby Senso-ji temple's abbot and his acolytes. 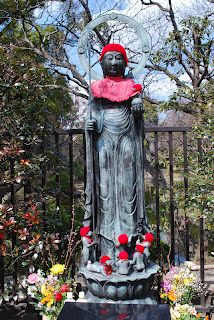 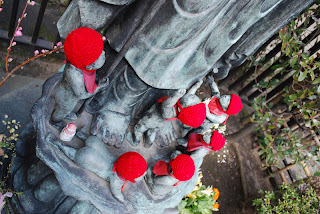 -Ubagaike, a.k.a. Old Hag's pond, or, rather, what remains of it today, that is to say a concrete basin next to a child's playground in Asakusa. The site is said to harbor the spirits of a wicked innkeeper from the 7th century, and the daughter she accidentally killed. The innkeeper would trick guests into sleeping in the "stone pillow" room, then let loose a boulder hidden in the rafters, which would drop on their heads, killing them while they slept. She did it in order to rob them. But one night the rock crushed her daughter instead, and the innkeeper, in her rage and grief, dragged the body to the pond and dumped it, and drowned herself. This story has inspired kabuki plays and at least one horror film.

-Senso-ji, said to be Tokyo's most famous and most frequently visited landmark. According to Lilly some 30 million people visit the temple every year (only 18 million go to Vatican City). The origins of the temple have to do with two fishermen who netted a statue of the goddess of mercy, and, try as they might, could not throw her back, and in seeking council from the town leaders, it was decided a temple honoring the goddess should be built. Like most landmarks in this city, though, the original wooden structure is gone, having burned down during the firebombing of Tokyo in WWII. What's there is a replica of the original, made from reinforced concrete with a titanium roof. 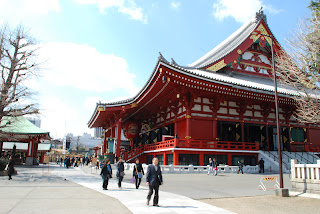 For her grand finale, Lilly performed a quick "exorcism" at the cleansing station outside Senso-ji, which is to say she demonstrated proper purification, a ritual practiced by virtually every visitor to this place: you fill the cup of the consecrated water, pour it over your left hand then your right hand, splash some on your lips and mouth (but don't drink), dump the excess in the gutter (not back into the basin) and tip the cup so that whatever remains runs down the handle, cleansing it. For good measure we made a quick stop at the big incense urn, where lots of smoke was curling off the tips of burning sticks stuck in sand. Lilly waved the smoke over her head, and said this is believed to help boost one's IQ.

Nourished by so much new information, I peeled off from the group and headed down Nakamise street, crowded with souvenir shops, so wonderfully kitsch. It's almost hanami time! 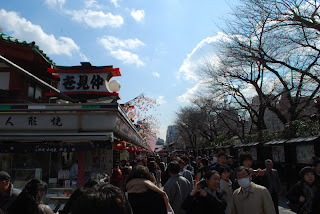 This is fascinating, thank you!
Love the cucumber eating deities. What a shame I'd never heard of any of this while I was there :-(
How I miss Tokyo.