Forgive me Jessica for I have sinned 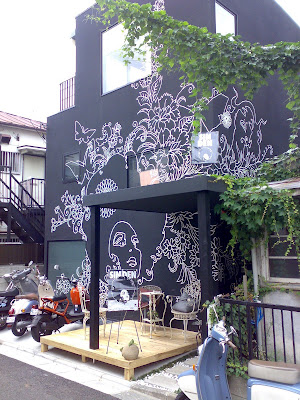 I thought I could wait until August for my next haircut, when I would be visiting the old 'hood and could go see the fantastic Jessica at Van Sickel, on Middaugh St. But it's been almost seven months since I saw her last, and the 'do was getting quite shaggy, so I reluctantly made an appointment at Sin Den in Jingumae, a place recommended by a few of the British mums here, perhaps because everybody in the place speaks English and it's near the British school.

From the look of the place you'd think it would be easy to find, but the building is tucked around a corner of an alley down a side street off a busier road with no name. (To find anything here in Tokyo you need a detailed map -- most businesses will post one online, but it's not always available in English -- and ideally turn-by-turn instructions that say things like "head toward the Geox" and "you'll see two red brick houses" and "follow the stone wall" -- and even then it's still a good idea to leave extra time for getting lost. As Dave Barry explains, "Tokyo is huge. Something like 15 million people live there, and my estimate is that at any given moment, 14.7 million of them are lost. This is because the Tokyo street system holds the world outdoor record for randomness. A map of Tokyo looks like a tub of hyperactive bait. There is virtually no street that goes directly from anywhere to anywhere." He's right.)

Sin Den has signs posted in the area, like this one that tells me to turn around and go the other way... 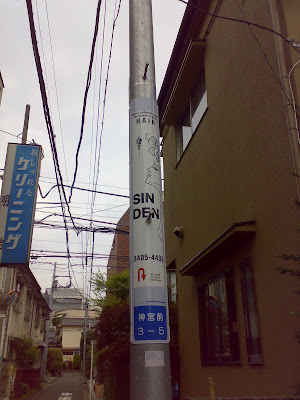 Anyway, I eventually found it, and the pretty young Japanese girl who shampooed my hair massaged by head too, which felt great, and then a stylist named Risa, also Japanese but fluent in English, talked about the various ways to drink umeshu (she recommends mixing it with oolong tea) while she took three inches off and put in some long layers and added product and used the diffuser to dry it all wavy, blah blah blah, and so I'm happy. I can check "haircut" off my list and move on to other things (like where can I go in this town for a bikini wax when the locals don't appear to suffer from so much unwanted body hair?). Except now I want to call Jessica, confess all and beg forgiveness.