Snapshots from our day at Sea 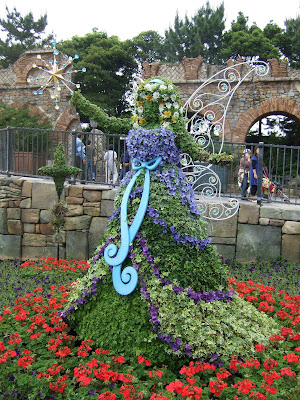 Last week we took the boys to the Tokyo Disney Sea theme park, to celebrate Dylan's 6th birthday. Why "Sea"? It's not Sea World. But many attractions have some water-related theme, like the 20,000 Leagues Under the Sea thing and the Blowfish Balloon Race, while others don't (see Floral Hedge Fairy, above). Alas, no Splash Mountain.

We took the train there. The Nintendo DS helped pass the time... 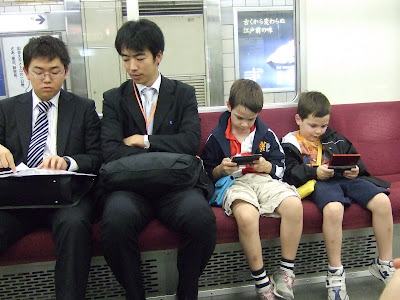 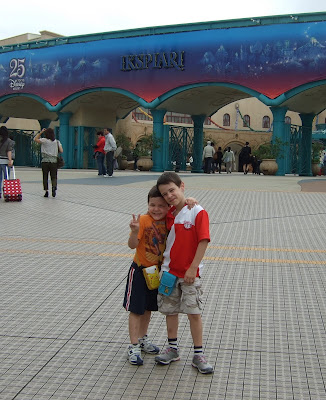 Across the street from the Maihama JR stop, about an hour from Ebisu (one transfer), is the Disney monorail, which takes you straight to the park. Our decision not to get a car: validated once again! 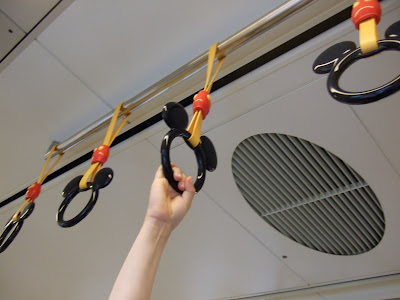 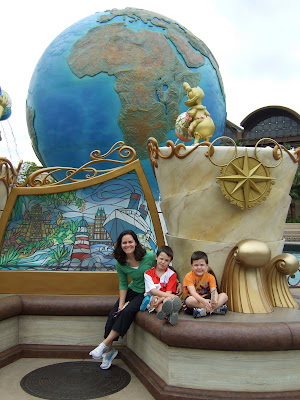 Thankfully the crowds stayed away. It was a Wednesday, the skies were overcast and Japanese schools were in session (as was the British School...ssshh) so it was the perfect day to do it, really. Never more than a few minutes' wait for a ride! 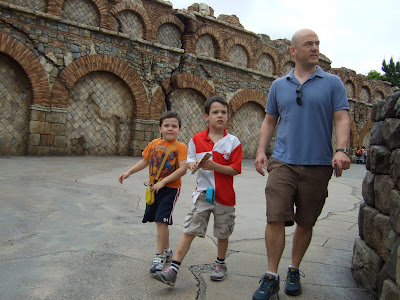 A significant number of those who did turn up were young couples (it's a popular place to take dates). Many were decked out in souvenir-shop attire, the ladies especially (note the black knee-socks -- or in many cases thigh-socks -- which are a popular spring look here in Tokyo, and not specific to the Disney uniform): 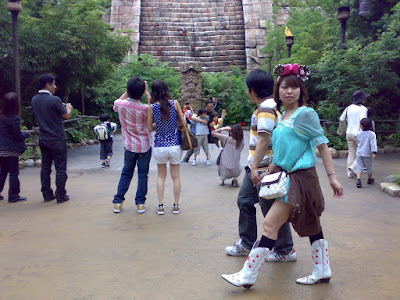 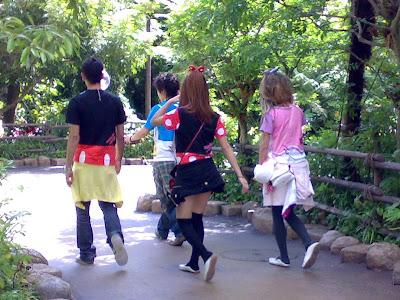 We saw lots of young women too, typically in pairs or in groups of three or four, almost invariably sporting the mouse ears or a Minnie Mouse bow, or both. 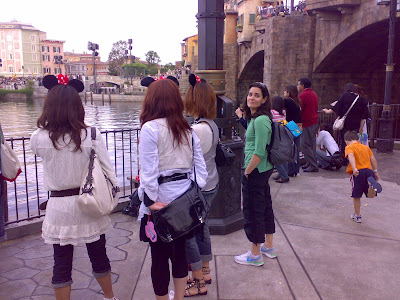 A few had on the Jasmine headpiece with veil. I figured this group pictured below (that's a gondolier snapping their photo) had to be a bachelorette party until Terry reminded me about the Disney princess from Aladdin: 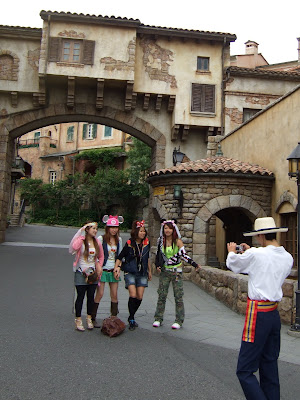 These gal-pals were behind us on line for the Flying Fish Coaster: 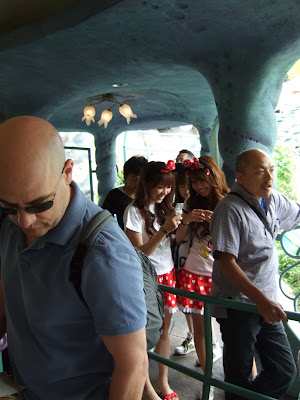 I think we rode this coaster five times before the day was through. 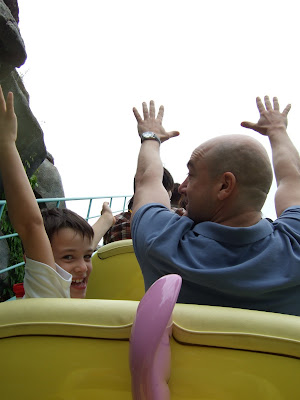 Terry took the boys on the Caravan Carousel 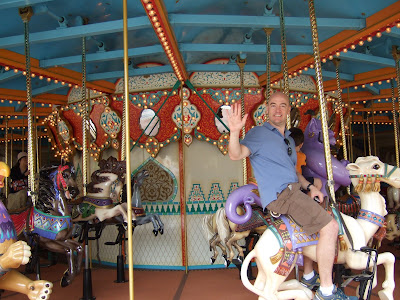 Here I am with Conor on some other ride I can't remember the name of; Terry and Dylan are in the car across from us, well within camera-phone range... 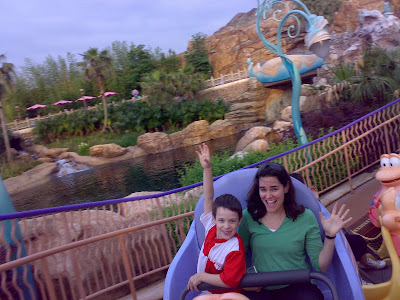 We saw many dudes with commemorative Lilo-and-Stitch popcorn tubs dangling from their necks (see below, right) 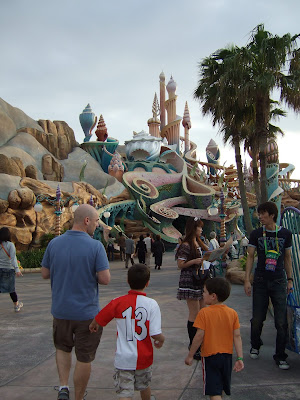 And there were quite a few stuffed Stitches about. 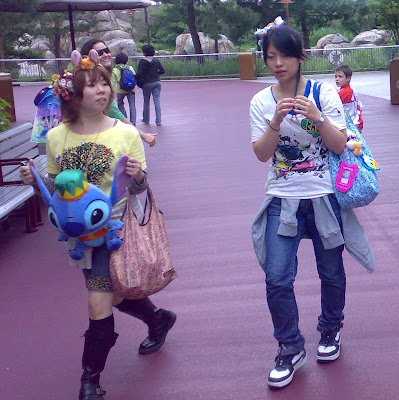 Ariel's Playground (indoors) was surprisingly boy-friendly (lots of
rope bridges to scamper across, snails to climb...) 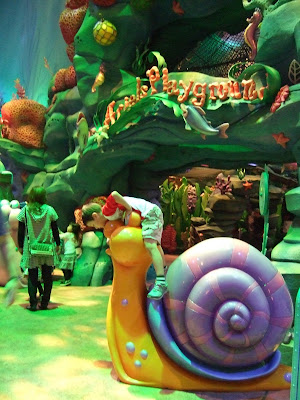 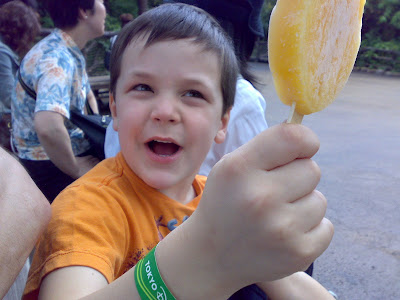 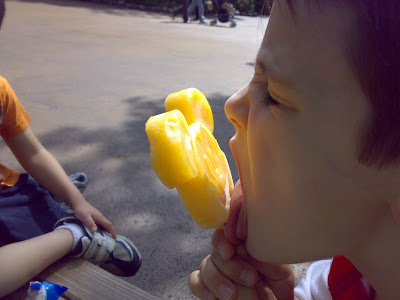 This is the pyramid outside the Indiana Jones Adventure/Temple of the Crystal Skull, known to locals as simply, "Ind-ee Jo-n-zu." It was the boys' idea to pose this way. (Are they mocking their yoga-practicing mom?) 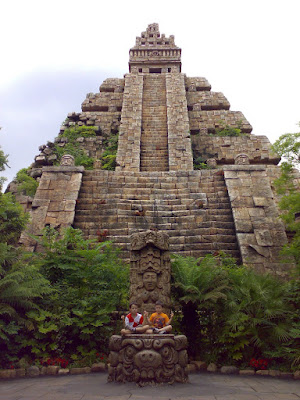 Dylan just made the height requirement for the Indiana Jones ride. That should've told us something...Because he was silent for most of it, and kept his eyes squeezed shut, then burst into tears when it was all over and demanded to know why I had to tell him about the spiders. After lurching through a dark tunnel, suddenly there are spotlights shining on the walls and they look like they are covered with tarantulas; I must have said something like, Ohmygod, spiders! Sorry, Dyl. 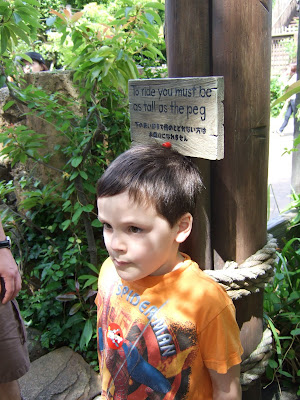 He recovered quickly though. 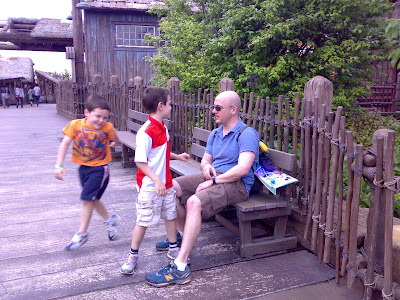 It's starting already: Conor often shoots this sort of "Boy, are you clueless!" look that I thought we wouldn't see until at least age 12. In this case it was directed at his Dad. 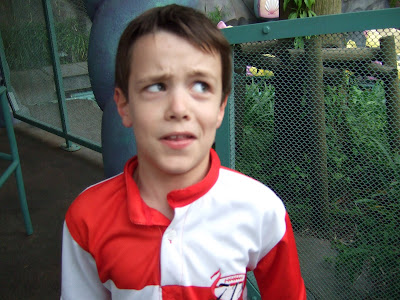 Moments later, he's back to the Conor I know! 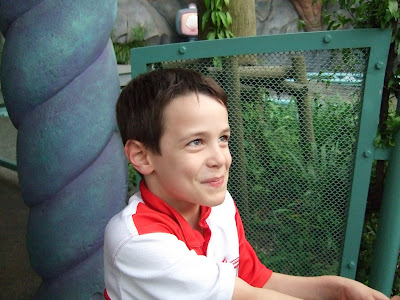 The boys balked at posing with Goofy. Not I! 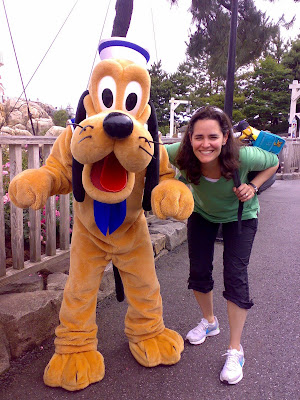 Photographing Strangers, Take 27: Quick, to the footbridge! Minnie Mice approaching!
(That's the Tower of Terror in the background.) 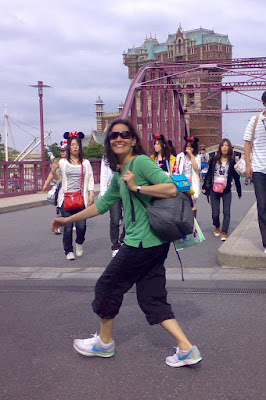 While Terry and Conor did the free fall in that terrible tower, Dylan and I took in a show.
The dialogue was in Japanese but at one point couples were ballroom dancing to Flashdance's "She's a Maniac" and Madonna's "Express Yourself." There were lots of smallish acts doing their thing around the park. Maintenance men were trained mimes; a trio of "chefs" did a whole steel-drum bit with whisks and spatulas. But the topper was the fire and water show on the lake, after dark, featuring a flame-throwing mechanical Godzilla/Loch Ness Monster that rises out of the water and does some sort of battle against a water-blasting vessel, all to a dramatic score. Dylan fell asleep right after that, having been at the park for nearly 10 hours. 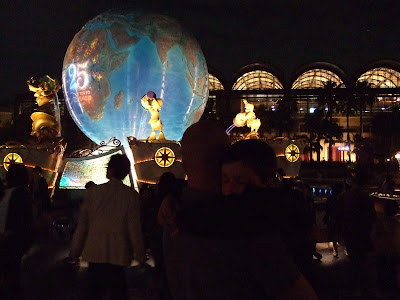 It's like you're an ethnographer! (Is that the right word??) Documenting a crazy, previously undiscovered people that worship small mice. For me, their tribal dress is especially interesting...