I love that the taxi drivers here wear suits and ties and that their cabs are spotless inside and out. The upholstered seats have doily-like covers. Doors open and close automatically. There's no tipping, which feels weird but is good because fares are high, starting at around $7 (meters click on at 710 yen). We sprang for a cab home from the grocery store, where we dropped 14,980 yen (about $138) on milk, OJ, cereal, yogurt, bread, butter, pasta, tomato sauce, pesto sauce, eggs, cheese, bananas, a bag of Belgian waffles, pancake syrup, clementines, apples, lettuce, carrots, salad dressing, olive oil, soy sauce, wasabi, a six-pack of Yebisu beer and some pre-packaged sashimi (tuna, salmon, sea bream) for tonight's (grown-up) dinner.

The boys ate while we were out window shopping on Omotesando-Dori (street) which has all the high end stores (Gucci, Fendi, Burberry, etc. etc.) as well as some less fancy ones (Puma, Body Shop, Gap). One part of Omotesando, a western stretch near the Harajuku train station, was packed with street food vendors (maybe on account of the holiday? they weren't there the next time I passed thru) and the boys got corn-on-the-cob-on-a-stick: 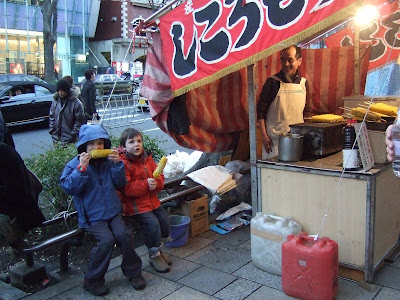 C also had fried chicken-on-a-stick and D had a hotdog-on-a-stick. For some reason they opted not to get the grilled octopus-on-a-stick, which actually looked really good (though D asked if we could "buy some tentacles" when we were shopping for groceries).

While noshing on his corn, our 7-year-old asked T if it was O.K. that he was eating in public. (We had explained to him that it's just not done here, but if the food is from a sidewalk vendor, apparently society makes an exception.) The boys split a chocolate-dipped banana-on-a-stick for dessert.

Time to eat some raw fish!
Posted by Maryanne at 8:22 PM

Labels: food, out and about with kids, shopping