We spent most of Sunday in Odaiba, a man-made island and shopping/sightseeing destination in Tokyo Bay. There's a waterfront park with a beach and large rocks for the boys to slip on. The boardwalk has lots of restaurants and a giant mall called Aqua City. We watched a street performer juggle flaming batons on a promenade next to a sizable replica of the Statue of Liberty before heading to Joypolis, Sega's indoor amusement park to empty our pockets of yen.

Before hitting the Sega game rooms we paused to snack on some octopus dumplings (takoyaki) from a food stand on the boardwalk. The cooks make them by dropping bits of cooked octopus meat, ginger, green onions and other tidbits into batter that has been ladled into a special cast-iron griddle with golf-ball-size cups. You cook 'em halfway then turn the balls over with a small wooden stick to finish the job. Think Florida conch fritters, only gooier. Ours were garnished with too much mayo and a sweet brown sauce. We ate them while sitting on one of the benches on the terrace in front of the mall entrance. There is a pretty nice view of the city from there, and there were many (younger) couples all around us. According to one guide book, the spot is considered one of the most romantic in Tokyo.

Here's a shot of Tokyo Bay and the Rainbow Bridge from Odaiba Marine Park: 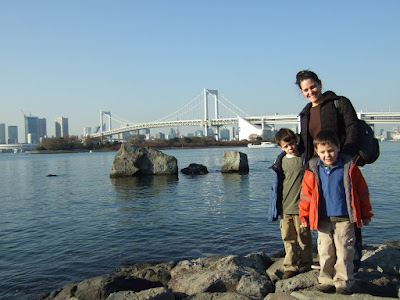 Still Marine Park, shot looking in the opposite direction. Who's that lady with the torch? 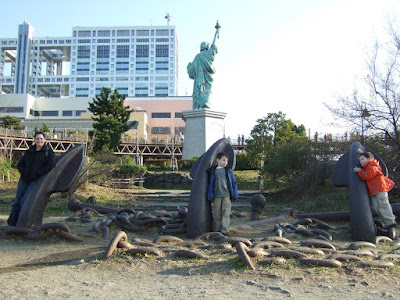 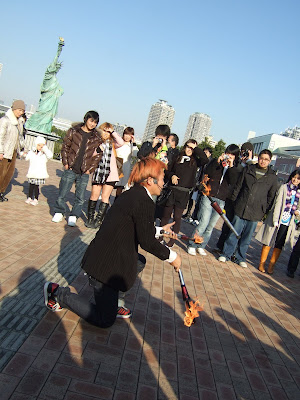 Labels: food, out and about with kids, parks