Friday night T's company hosted a welcoming dinner for him and another newcomer to the office. It was in the Yuhraku-cho area, near Ginza, at a sushi restaurant called 居酒屋 八吉 (Izakaya Yakichi). The office party of nine was seated in a private tatami room and sat around one big low table. They didn't have to sit with legs crossed; there was a well under the table where you could put your legs.

First course: sushi and Caesar salad. Tuna, sea bream, yellowtail, snapper, and the salad came with raw egg on top (raw or barely cooked egg is big here; you're supposed to mix it up with whatever you're eating, and it's delicious!). 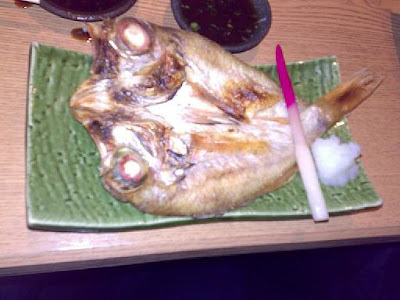 Third: fish stew brought to the table in big pots over a portable gas jet (like with shabu shabu). In the stew: various forms of fish, scallops, mushrooms and translucent wide noodles (glass noodles?) in a clear broth.

To serve the fourth course the waiters removed the stew pots and brought out big pots of Udon, wide starchy noodles in a plain broth.

For beverages they started out with pitchers of beer (Asahi), then graduated to sake, shoju (japanese vodka) and red wine. Wet steaming towels were handed out at the beginning so you could wipe your hands. (You're not expected to have a napkin on your lap.)

The boss went home after dinner while the rest of the group walked to nearby BigEcho, which rents out private rooms (the typical way it's done here). It is customary for the new guy to sing first. T chose Don't Stop Believin' for his first go, then later Franz Ferdinand's Take Me Out. At one point he joined in for Highway Star (Deep Purple?). Just like in the U.S., the drunker people got, the more they joined in until everyone is singing everything.

The karaoke place had waiters who would bring drinks from the bar to the room on a tray. To avoid blocking the screen, the waiter would walk in and quickly drop to one knee and quietly put the drinks on the table. Drinks were ordered by picking up a phone. T took some pics with his new mobile (we both got Nokia handsets from SoftBank...but that's a topic for another post) but won't let me post any!
Posted by Maryanne at 1:28 PM